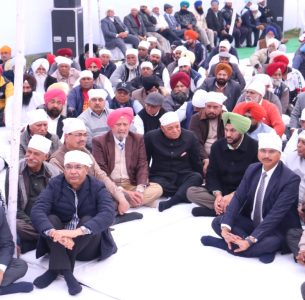 In an impressive function held at the native village of former Punjab Minister, the MLAs Sushil Kumar Rinku and Santokh Singh Bhalaipur, Chairman Punjab State Board of Technical Education Mohinder Singh Kay Pee, Chairman Markfed Amarjeet Singh Samra, Deputy Commissioner Varinder Kumar Sharma, Commissioner of Police Gurpreet Singh Bhullar and Senior Superintendent of Police Navjot Singh Mahal, along with Lok Sabha MP Chaudhary Santokh Singh, MLA Chaudhary Surinder Singh and Congress leader Vikramjit Singh Chaudhary, and people from all walks of life paid floral tributes to the former Punjab Minister. They described Master Gurbanta Singh as a votary of the downtrodden and oppressed sections of the society. They said that Master ji’s contribution in the welfare of the underprivileged sections of society would be ever remembered by one and all.

Paying tribute to Master Gurbanta Singh, they said that this legendary leader was amongst those icons who made tremendous sacrifices to free the country from foreign imperialism and then led the country in the process of its reconstruction. They said that under the visionary leadership of Pandit Nehru and S. Kairon, Master Gurbanta Singh scripted the destiny of state by taking historic decisions like the construction of Bhakra Dam, setting up of Punjab Agriculture University, providing a robust irrigation system, imparting quality education to weaker sections of society and others.

In his address, Lok Sabha MP from Jalandhar Chaudhary Santokh Singh also recalled the visionary decisions taken Master Gurbanta Singh for the sake of the country and its people. He said that Master Gurbanta Singh was a true patriot, bold and visionary leader, who always worked for the welfare of every strata of society adding throughout his life Masterji was a votary of value-based and clean politics. The MP also thanked all the party leaders and workers who have attended the function to pay homage to the great leader.

Earlier, MLA from Kartarpur assembly segment Chaudhary Surinder Singh, while expressing gratitude to all the dignitaries, said that the family was indebted to them for attending this function. He said that Master Gurbanta Singh had shown the path to family to serve the needy people and they would impart this duty zealously.

PM condoles the passing away of Justice A S Dave