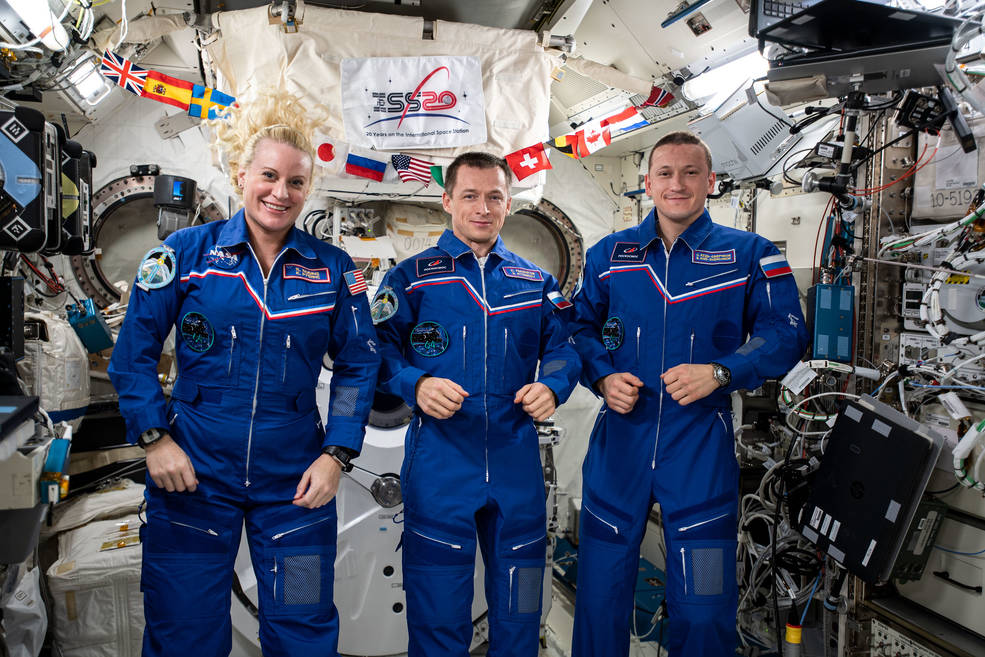 Expedition 64 Flight Engineers Kate Rubins of NASA and Sergey Ryzhikov and Sergey Kud-Sverchkov of Roscosmos are scheduled to depart the International Space Station Friday, April 16. The three crew members are pictured inside the Kibo laboratory module from JAXA (Japan Aerospace Exploration Agency).
Credits: NASA
NASA APRIL 14,2021: Expedition 64 Flight Engineer Kate Rubins of NASA and two Roscosmos cosmonauts are scheduled to end their mission on the International Space Station Friday, April 16. Coverage of departure from the station and landing on Earth will air live on NASA Television, the NASA app, and the agency’s website.

Rubins, along with Russian cosmonauts Sergey Ryzhikov and Sergey Kud-Sverchkov, will close the hatch to the Soyuz MS-17 spacecraft at 6:10 p.m. EDT to begin the journey back to Earth. The trio will undock from the space-facing port of the station’s Poisk module at 9:34 p.m., heading for a parachute-assisted landing at 12:56 a.m. (10:56 a.m. Kazakhstan time) Saturday, April 17, on the steppe of Kazakhstan, southeast of the remote town of Dzhezkazgan.

In advance of Soyuz departure coverage, station commander Ryzhikov will hand over command of the station to NASA astronaut Shannon Walker during a change of command ceremony. The event will air live on NASA TV, the NASA app, and the agency’s website beginning at 3:45 p.m. Thursday, April 15.

On Friday, April 16, coverage of the farewells and hatch closure for the departing crew members will begin at 5:45 p.m., followed by undocking coverage at 9:15 p.m., with coverage of the Soyuz deorbit burn and landing beginning at 11:30 p.m.

After landing, the Soyuz MS-17 crew will split up, with Rubins returning to her home in Houston, while the cosmonauts fly back to their training base in Star City, Russia.

Learn more about space station activities by following @space_station, and @ISS_Research on Twitter, as well as the ISS Facebook and ISS Instagram accounts and the space station blog.