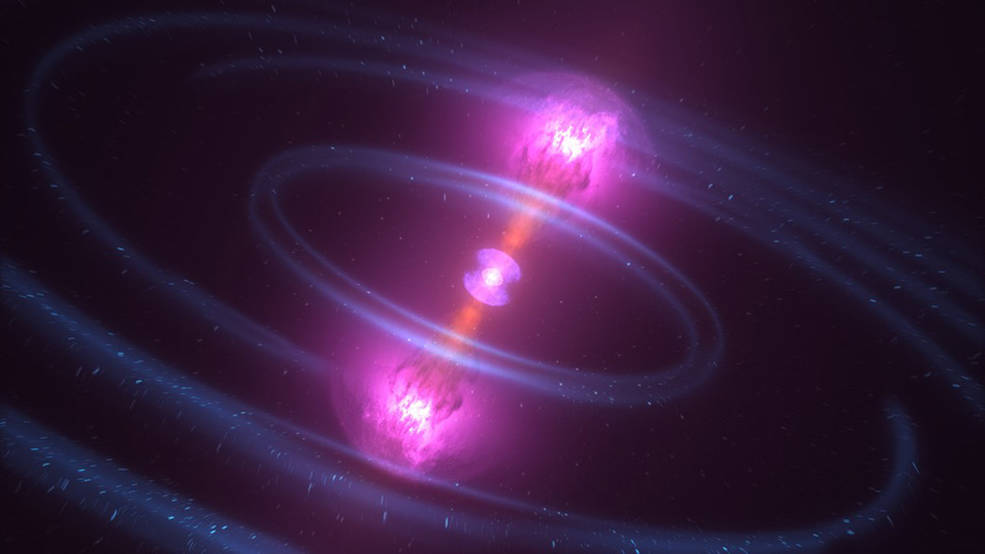 As neutron stars collide, some of the debris blasts away in particle jets moving at nearly the speed of light, producing a brief burst of gamma rays.
Credits: NASA’s Goddard Space Flight Center/CI Lab

“The principal investigators of these concept studies bring innovative, out-of-the-box thinking to the problem of how to do high-impact astrophysics experiments on a small budget,” said Thomas H. Zurbuchen, associate administrator of NASA’s Science Mission Directorate. “Each of the proposed experiments would do something no other NASA telescope or mission can do, filling important gaps in our understanding of the universe as a whole.”

These are the four concepts chosen for further study:

Aspera is a SmallSat that will study galaxy evolution. Through observations in ultraviolet light, it will examine hot gas in the space between galaxies, called the intergalactic medium, and the inflow and outflow of gas from galaxies. The intergalactic medium is a major component of the universe, but is poorly measured; Aspera would close this gap. The principal investigator is Carlos Vargas at the University of Arizona.

Pandora is a SmallSat that will study 20 stars and their 39 exoplanets in visible and infrared light. It is aimed at disentangling the signals from stars and planetary atmospheres. Understanding how changes in starlight affects measurements of exoplanets is an outstanding problem in the search for habitable planets beyond the solar system. The principal investigator is Elisa Quintana of NASA Goddard Space Flight Center.

StarBurst is a SmallSat that will detect high-energy gamma rays from events such as the mergers of dense stellar remnants called neutron stars. This would provide valuable insight into such events, which are also detected through gravitational waves by observatories on Earth. These events are where most of the heavy metals in the universe, such as gold and platinum, are formed. To date, only one such event has been observed simultaneously in gravitational waves and gamma-rays; StarBurst would find up to 10 per year. The principal investigator is Daniel Kocevski of NASA Marshall Space Flight Center.

PUEO is a balloon mission designed to launch from Antarctica that will detect signals from ultra-high energy neutrinos, particles that contain valuable clues about the highest energy astrophysical processes, including the creation of black holes and neutron star mergers. Neutrinos travel across the universe undisturbed, carrying information about events billions of light years away. PUEO would be the most sensitive survey of cosmic ultra-high energy neutrinos ever conducted. The principal investigator is Abigail Vieregg of the University of Chicago.

After additional definition, these four concept studies will undergo a concept study review before being approved for flight.

The Pioneers program provides opportunities for early-to-mid-career researchers to propose innovative experiments and lead space or suborbital science investigations for the first time.

“Through this program designed to attract young professionals, we received two dozen great ideas from a diverse cohort of innovators at universities, research laboratories, and NASA centers,” said Paul Hertz, director of NASA’s astrophysics division at NASA Headquarters in Washington.

The principal investigators must be creative in designing missions to keep expenses down, as the cost cap for a Pioneers mission is $20 million.  This low price point is enabled in part by the flourishing industry of small satellites for Earth observing and internet access, allowing researchers to purchase off-the-shelf spacecraft.  In addition, telescopes developed by other government agencies can be used, rather than starting from scratch.

The program itself is an experiment for NASA. The agency has never solicited proposals for these kinds of astrophysics experiments at such low cost caps with such tight constraints. Some of the concepts may, upon further study, require a bigger budget, meaning they would not ultimately be approved for flight through the Pioneers program.

“We don’t know if there is great astrophysics that can be done in a $20 million satellite, but we challenged the community and they sent in a lot of innovative proposals,” Hertz said. “Now, we’re excited to see if they can deliver.