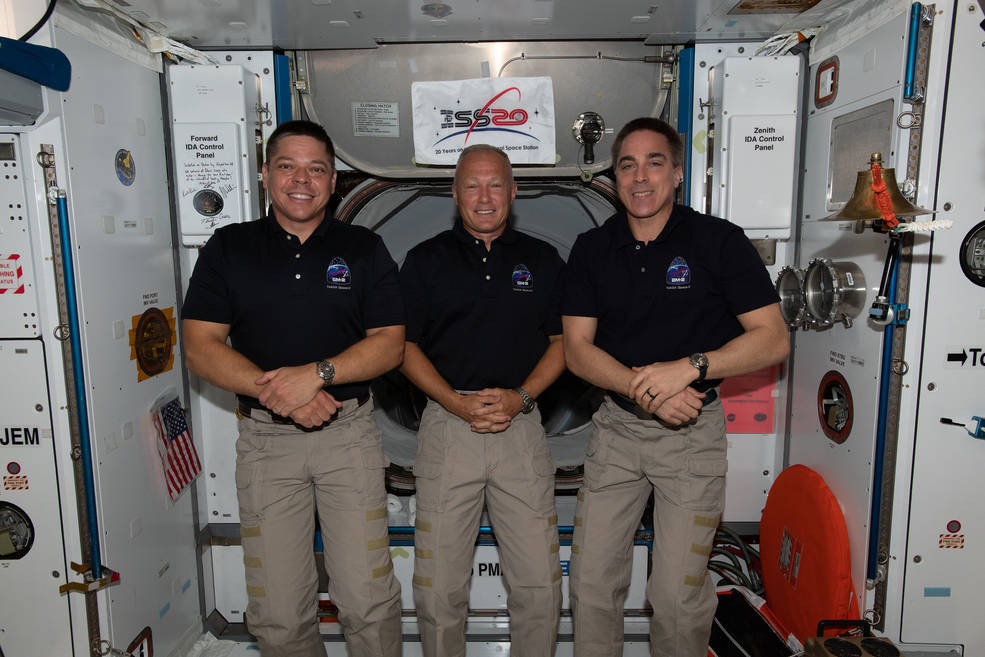 NASA astronauts (from left) Bob Behnken, Doug Hurley and Chris Cassidy are the U.S. members of the Expedition 63 crew aboard the International Space Station.
Credits: NASA

Fellow NASA astronaut and current Expedition 63 commander Chris Cassidy will join the agency’s SpaceX Demo-2 test flight crew for the 30-minute news conference, which will air live on NASA Television and the agency’s website just two days before Behnken and Hurley are targeted to return to Earth.

All media participation will be remote; no media will be accommodated at any NASA site due to the COVID-19 pandemic. Media may ask questions by phone by calling the newsroom at NASA’s Johnson Space Center in Houston at 281-483-5111 no later than 8:45 a.m. EDT (7:45 a.m. CDT) Friday, July 31.

Weather permitting, NASA and SpaceX are targeting 2:42 p.m. EDT Sunday, Aug. 2, for the splashdown and conclusion of the Demo-2 test flight mission, which is part of NASA’s Commercial Crew Program. The SpaceX Crew Dragon spacecraft, named Endeavour, lifted off May 30 on the company’s Falcon 9 rocket from Launch Complex 39A at NASA’s Kennedy Space Center in Florida.

With this test flight, NASA and the U.S. aerospace industry are marking the first successful launch of a crew to the space station on a commercially built and operated American rocket and spacecraft, and a safe return to Earth for that spacecraft and crew.

This is SpaceX’s final test flight in NASA’s Commercial Crew Program and will provide data on the performance of the Falcon 9 rocket, Crew Dragon spacecraft, and ground systems, as well as in-orbit, docking, landing, and crew return operations.