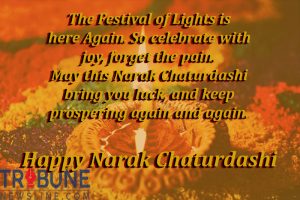 The day two of the five- day Diwali festival is celebrated as Narak Chaturdashi or Choti Diwali. Though the basic celebration of this day includes praying to god, lighting diyas, decorating houses, etc., but this day has lots of legends attached to it too. Here we present to you some interesting facts about this day.

Choti Diwali is celebrated on The celebration of Diwali starts with Dhanteras or Dhanatrayodashi. It is celebrated on the fourteenth lunar day of Krishna Paksha (dark fortnight) in the Hindu calendar month of Kartik.

According to the mythological legends, Narkasura, the demon king and the ruler of Pragjyotishpur (a province to the South Nepal) and son of the Mother Earth challenged Lord Indra for a battle to rule over heaven in which he defeated the God. Thereafter, he snatched away the stunning earrings of Aditi- the Mother of the Gods and incarcerated sixteen thousand daughters of saints and Gods in his harem due to the prophecy of his death at the hands of a woman.

Dejected by the atrocities of Narakasura, Lord Indra went straight to Lord Krishna and asked for his help in the matter. Lord Krishna decided to challenge the demon king for the battle to put an end to his cruelties against Gods and women. As Naraksura was destined to be killed by a woman who is an incarnation of Bhumidevi, the king’s mother, he asked his wife Satyabhama to accompany him in the battle as she was an incarnation of Bhumidevi. Satyabhama agreed to join her husband in the battle.

Lord Krishna launched an attack on the palace of the Naraksura overcoming all the barriers that came in the way. He even killed the powerful demon Mura who protected the palace with his Sudarshan Chakra. Fighting all alone, Lord Krishna became tired and weak. Understanding the plight of her husband, she took the place of him and kills Narakasura with a bow and arrow.

All the women captives got freed from his palace. On his death bed, the demon king requested Lord Krishna and his wife that his death should not be mourned but celebrated. So, this day began to be celebrated as Choti Diwali or Narak Chaturdashi in India.

The rising atrocities inflicted by King Bali on the people forced Lord Vishnu to attain a Vamana (dwarf) avatar to put an end to them. He went to his palace in the form of a beggar and asked for help from King Bali. In response, he asked the beggar to demand anything from his kingdom in three steps.

Lord Vishnu covered the whole heaven in the first step, the complete earth in the second step, and when nothing was left with King Bali to give the beggar for the third step, he gave his head to keep the third step. As soon as Lord Vishnu put his foot on his head, King Bali was sent to the underworld.

As a part of the celebrations and victory of good over evil, diyas and lamps were lit in the palaces of Gods and the atmosphere was of merriment and happiness. The whole incident came to be known as “Bali Pratipada” in Hinduism.

Once there was a king, Ranti Deva, who was a wise and pious man. When the time of his death arrived, Lord Yamraj came to take his soul. As the Lord was approaching him, the king asked him why he wants to take his soul to Narak when he has done nothing wrong in his life. Lord Yamraj told him that once a priest went back hungry from his door.

The Kind asked for a year’s time from Lord Yamraj to which he agreed. The king told the entire story to the saints and they suggested him to keep a fast on the Kartik Krishna Paksha Chaturdashi, offer food to priests and ask for their forgiveness. He did as they told him and got relieved from his sins.

Once upon a time, there was a man named Yogiraj in the Hirnagarbha Kingdom. To please God, he holds his own grave and suffered massively during his self-mortification. His entire body became ugly and he became extremely sad. Seeing his plight, Lord Narad paid a visit to him and asked the reason for his sadness to which Yogiraj told him about his sufferings.

The Lord told him that though his intentions were right, but he forgot to follow the body ethics. He told Yogiraj to observe the fast of Kartik Krishna Paksha Chaturthi for a healthy and attractive body. As a result, Yogiraj attained a beautiful body.

Kali Chaudas together mean the dark night of the fourteenth day of the month of Kartik on which Goddess Kali is worshipped to ward off all the evils from the life. It is believed that Goddess Kali killed the cruel and wicked Raktavija on this day. The day signifies staving off all the laziness and evil and brings the light of hope and happiness in life.

On the day of Kali Chaudas, people wash their heads in the morning and apply Kajal in the eyes to protect them from the evil eyes. People also prepare delicacies from the semi-cooked rice or Poha to offer Goddess Kali. The day also observes people offering Nived (food) to their Kul Devi to keep themselves protected and seek her blessings on this day.

Kali Chaudas is celebrated majorly in the Rajasthan, Gujarat, and some parts of Maharashtra.

In South India, people make a paste from kumkum and oil known as ‘Ubtan’ which symbolizes the blood of the demon king Narakasura. After breaking a fruit signifying the head of the demon king, they apply this ubtan on their foreheads. They take a bath using oil and sandalwood paste before the sunrise. The house is cleaned and decorated with Rangoli.

In Goa, effigies of Narakasura are created and burnt on the streets to represent the triumph of good over evil.

In West Bengal, the day is celebrated as Kali Chaudas in West Bengal. The statues of Maa Kali are placed in Pandals and Kali Puja is performed.

In Maharashtra, people indulge in traditional early baths with Ubtans made with besan, chandan, Multani Mitti, haldi, and rose petals. After the bath and worship, they prepare vermicelli kheer with milk and sugar or puffed rice with curd.

This Diwali, Not loud with crackers, but sonorously vocal for local
Last date for filing applications under Sabka Vishwas 31st December, 2020
Comment