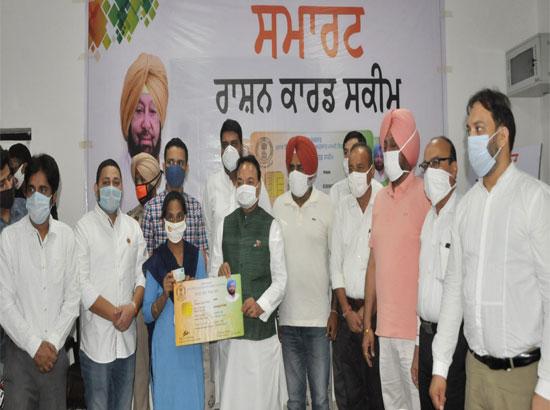 Jalandhar, September 12, 2020: In a move towards the effective, transparent distribution of food grains and giving freedom to eligible beneficiaries to get ration from any depot holder in the state, Member of Parliament (MP) Chaudhary Santokh Singh on Saturday started state government’s ambitious pro-poor digital initiative `Smart Ration Card Scheme’ by handing over smart cards to the beneficiaries in a launching ceremony organized at district administrative complex.

He said that now people are free to receive food grains from any government fair price shop (Ration Depot) of their own choice without worrying about transferring their Ration Cards to the concerned Depot.

Pointing out further, the MP said that the new system would weed out fraud or pilferage in food distribution completely as the entire system is based on end to end computerization system. He said that a total of 2, 48,205 families would get these smart ration cards having a chip embedded into them with complete details of identification data of the beneficiary.

He said that the beneficiaries get food grains twice in a year under the scheme and single member of each family get 30-kg-wheat (5kg per month).

Chaudhary said the smart ration card-holder beneficiaries need not carry identification proofs like Aadhaar to the fair price shop to collect their share of foodgrains from any of 917 ration depots of the district.

MP further added that the scheme aimed at enhancing transparency and accountability in the public distribution system besides doing away with the proxy distribution as under the smart ration card regime only a real beneficiary could get ration from the depot.

Elated over the launching of the scheme, one of the beneficiaries Preeti of Dakoha said that now her family would be able to receive food grains from any ration depot in the district and there would be completely clean and clear distribution.

Davinder Kaur, another beneficiary said that the smart ration card scheme has empowered them as none of the depot holders would be able to get any kind of pilferage.