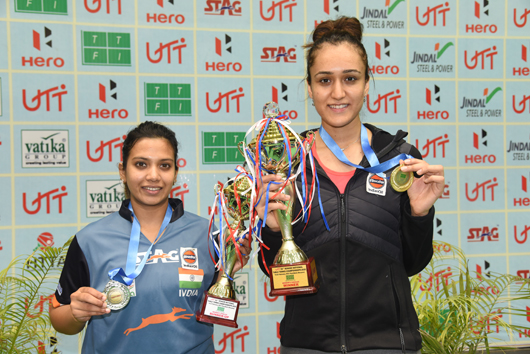 Manika had won her maiden title way back in 2015 at the Hyderabad Nationals and finished a runner-up at Ranchi in 2017 when she lost the final to Sutirtha Mukherjee, reports TTFI.

Without taking any credit away from the top-ranked Indian in the world, she won the match and title when Reeth first lost her rhythm in the third game and again when she regained it in the fourth, leading 9-3. Manika took eight points on the trot to level the score. After that, the body language changed for both.

Manika always read to grab such golden opportunities with both hands, tightened the noose around Reeth’s neck putting her in all discomfiture. The fifth game was a runaway hit for Mania as she pushed Reeth into a completely defensive mode. Suddenly, the attacking posture of Reeth deserted her and she looked like an ordinary player, making Manika a monster.

It was clever of Manika to change her strategy when Reeth was attacking in the second game which the latter won on extended points. The defence of Reeth could not be comprehended and too many net errors in the crucial stages also cost Reeth the chance of becoming the national champion. Additionally, she lost the opportunity to avenge her title-loss at the Institutional championships in 2019. There, too, Reeth had let the crown slip off her hands after handsomely leading 3-1 in the final. Maybe, a 3-1 cushion here, very much in the realm of possibility, could have changed her fortunes. But it was not to be.

Fourth-seeded Sreeja Akula would rue missing her opportunities after the RBI girl made it 1-1 in the semifinals against Manika. In the third game, especially, she held two game points but squandered them.  Manika pounced on them to close her out with a 2-1 cushion.

In the fourth, Sreeja failed to handle the pressure and kept adding to the mistakes. Her lack of reach and anticipation only aided Manika, who went from strength to strength. Without wasting time, the top seed established a quick lead in the fifth and forced the RBI paddler to throw in the towel.  The 4-1 verdict in favour of Manika did not sum up Sreeja’s cool demeanour and her ability to compete at the highest level.

One expected the Reeth Rishya-Takeme Sarkar showdown to be a gripping affair. The PSPB paddler has come a long way from her patchy days. Her opponent from the Railways, known for playing an attacking game, failed to read the situation. Reeth, with her experience, proved a superior player on the day and adapted well to take control of the match.