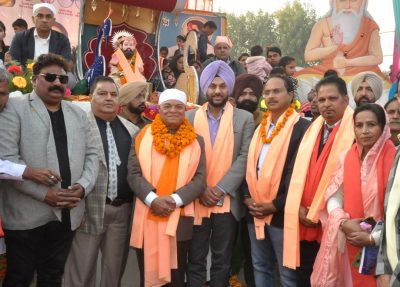 The MP, MLAs, Deputy Commissioner and Commissioner of Police further said that Sri Guru Ravidass ji Maharaj had propagated the message for carving out an egalitarian society. They said that following this message in the right earnest was the need of the hour to carve out a harmonious society based on equality and justice. They called upon the people to follow the ideals preached by the great Guru ji and contribute to the well being of the society.

The MP, MLAs, Deputy Commissioner and Commissioner of Police said that such endeavors were the need of the hour to strengthen the social fabric of the country. Felicitating the people on this solemn occasion, they urged the people to tread the path shown by Sri Guru Ravidass Maharaj ji. They also lauded the role played by the various social organizations to make this Shobha yatra a huge success.