THE PROJECT WORTH RS. 40 LAC AIMS AT BRINGING EASE AND PROSPERITY IN THE LIVES OF AROUND 27,000 PEOPLE LIVING BY THE RIVER

INHABITANTS OF 25 VILLAGES WILL BE ABLE TO TRANSPORT THEIR LIVESTOCK, COMBINES, AND TRACTOR-TROLLEYS THROUGH 40X6.5 FEET HEAVY FLOATING FLEETS 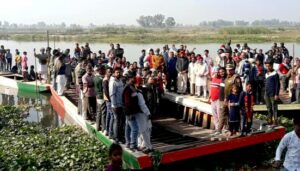 Ferozepur, December 10- Bringing a smile on the faces of villagers living on the bank of river Satluj, MLA Ferozepur city Parminder Singh Pinki on Tuesday handed over the four large floating rafts and three boats to the people of these villages.

Divulging the details, the MLA said that the step was aimed at bringing ease and prosperity in the lives of thousands of people belonging to these villages. He said that the total cost of this project was worth Rs. 40 Lac, which includes four floating rafts and three measuring 40X6.5 Feet and 24X6.5 Feet respectively.

The MLA further added that these rafts and boats will enable people not only travel across the river but to take their livestock, combines, tractor-trolleys, and other farm equipment to the other side of the river adding he said that this move will benefit around 27,000 people of 25 villages including Chandiwala, Kamalewala, Habibke, Tendiwala, Hjara, Gatti Rajoke, Bhane Wala, Nihale Wala, Kalu Wala, Nihanga wala and Kilchai, Kaluwala, Pallamegha, and others.

Lauding the efforts of MLA, the Sarpanch Avtar Singh, Mangal Singh, Harbans Singh said that it was a first-ever attempt made to bring happiness and ease in the lives of people living near river adding they said that the new fleet of rafts and boats will help children go to school across the river, make youth to finds jobs to the other side of the river, help farmers to take care of their fields efficiently. Besides, changing the socio-economic scenario in around 25 villages, this step will prove to be a boon for about 25 to 30,000 people.

Reciprocating the wishes of villages, Mr.Pinki said that he will leave no stone unturned to bring prosperity in these villages through taking development works there as his sole mission was to remove the tag of the backward area from these remote villages situated at Indo-Pak international border. He asserted that this little effort would give a fillip to the economic growth in these villages. On the occasion Sarpanch Desraj, Sarpanch Sardool Singh, Sarpanch Santa Singh, Major Singh, Chinder Singh, and others were present.