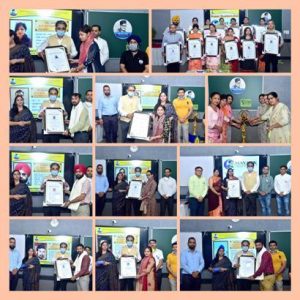 Ferozepur, September 11, 2020: After conferring certificates of appreciation to 25 top teachers of the town through the platform of social media for their key role in online education on the occasion of the teachers’ Day on September 5, Mayank Foundation Ferozepur held a felicitation ceremony to hand over the awards of honour to these teachers at Das and Brown World School here on September 10.

Foundation reiterated its commitment to the environment by offering one plant as a gift.

The foundation had decided to defer the ceremony due to week-long national mourning announced in respect of the demise of the former President Pranav Mukherjee. The function was presided over by Anirudh Gupta, the president of the foundation.

Speaking on the occasion, the foundation’s secretary Rakesh Kumar said that the work of these teachers, who were honoured for their exemplary role during the epidemic, was nothing short of great service.

The function was kick-started with the lighting ceremony. While addressing the teachers, Anirudh Gupta said that these teachers are the torch bearers of online education which has emerged as the great saviour to continue education. Now, education is reaching to the far- fetched areas, thanks to the efforts put- up by these teachers.  Notably, a sapling was also handed over to the teachers who took a pledge to nurture these plants.

Principal Sanjeev Tandon, the founding member of the institute, revealed that the names of the teachers for the award were decided by the panel set- up by the organisation. The extraordinary work done by these teachers on many fronts during the tough phase of the pandemic was kept in mind while nominating the names for the award. The award is a testimony of the respect that the foundation has for the teaching fraternity.