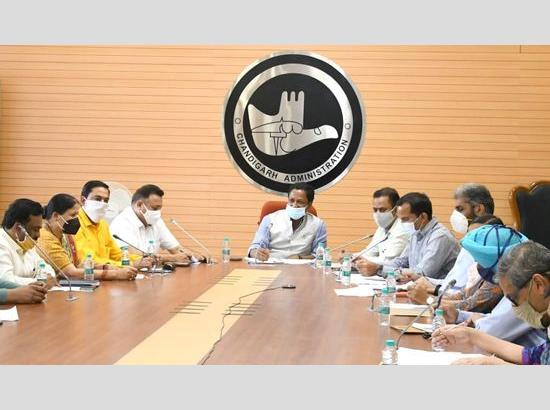 Chandigarh, April 8, 2021: A meeting was held today under the Chairmanship of Adviser to Administrator, Manoj Parida along with Mayor Ravi Kant Sharma, Debendra Dalai, IFS Chief Conservator of Forests, Deputy Commissioner, Mandip Singh Brar and Municipal Commissioner KK Yadav and with other senior officials of Chandigarh Administration to address the grievances and demands of Municipal Corporation Councilors from Ward number 11 to 20.

The councilors during the course of the meeting raised the demand regarding development-oriented projects in their wards. The Adviser assured them regarding the fulfillment of their demands and directed the concerned departments to work speedily in this direction following a strict deadline.

The Adviser also directed the early completion of primary health centers/dispensaries, community centers, approach/link roads, sewerage systems, sports complexes. He also directed the CEO of Chandigarh Housing Board to ensure hygienic conditions in the colonies as well as civic amenities.

Pointing out further, the Adviser said that the children can play in the school playground after school hours. Adding more, he said that the old building of the palsora school abandoned can be used for Anganwadi purposes and gave necessary directions to the Social Welfare department in this regard.

Further, the Adviser said that each demand will be redressed on merit and the U.T. Administration would extend every assistance. He also gave on-spot directions on issues that could be immediately redressed.

On the occasion, the mayor thanked the adviser for adopting a positive approach with regard to the various development projects in the city.

41.35 lakh tonnes of wheat procured in Haryana during April 1 to 16

HAFED sets a record of sale in a day