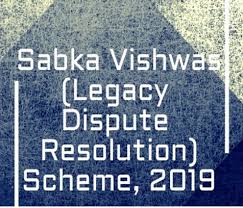 New Delhi Nov 12, 2020: In a major decision to help the trade and industry in the newly formed Union Territory (UT) of Jammu & Kashmir and UT of Ladakh, the Central Government has decided to extend the period for availing the Sabka Vishwas (Legacy Dispute Resolution) (SVLDR) Scheme (SVLDRS), 2019 to 31st December, 2020 for eligible taxpayers from these UTs.

This decision would come as a major relief to taxpayers of Jammu & Kashmir and Ladakh who faced genuine difficulties in availing the Scheme during the original period of operation. The extension gives these taxpayers a fresh opportunity to settle their past tax disputes.

SVLDRS, 2019 was introduced on 1st September, 2019 with the objective of reducing litigation and disputes relating to legacy taxes namely, Central Excise and Service Tax so that taxpayers could focus on GST. The Scheme provided taxpayers relief in payment of disputed tax amounts ranging from 70% (of the tax amount) to 40%. It also provided for full waiver of interest and penalty. The Scheme closed on 30.06.2020.

Despite impact of COVID-19, SVLDRS, 2019 evoked an enthusiastic response and a total 1,89,225 number of declarations involving total tax dues of Rs. 89,823 crores were received. The Scheme led to recovery of Rs. 27,866 crores making this the best performing scheme in the history of indirect taxes.

This decision to extend the period for availing the Scheme for the taxpayers of the UT of Jammu & Kashmir and UT of Ladakh would provide them a level playing field with the thousands of other taxpayers across the country who took the advantage of the Scheme.

The detailed guidelines shall be issued shortly.