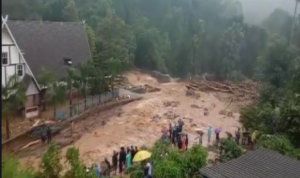 KOCHI, 7 August 2020 – A landslide caused by torrential rains killed at least 15 tea garden workers in Kerala on Friday, and rescue workers were searching for more than 50 people thought to be trapped under soil and debris, officials said.

Fifteen bodies had been recovered so far and another 51 people were feared to be trapped, he said.

“One team of National Disaster Relief Force have reached the site. Helicopters cannot be deployed as the climate is very misty,” he added.

Nearly 20 cm (7.9 inches) of rain fell on Thursday in Idukki district, according to data compiled by the state-run weather department. Idukki is about 240 km (150 miles) north of the state capital Thiruvananthapuram.

“The area has received heavy rains over the last two days and the landslides occurred after midnight. Those affected are mostly tea workers who were sleeping,” said S Sureshkumar, the district’s additional superintendent of police.

In 2018, Kerala was hit by the worst floods in a century. Hundreds were killed, many of them from Idukki district.

Exclusive • Lifestyle • Thought of the Day

Even though you’re damaged, you still have value