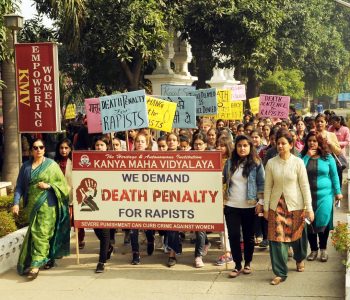 KMVites Chant Slogans For Speedy Justice to the Victim During the Rally
By SK.Vyas :

Jalandhar, December 4, 2019: Kanya Maha Vidyalaya- the Heritage & Autonomous institution, Seat of Women Empowerment, Ranked No.1 College in India by India Today Ranking (in various categories) caring and sharing for the society is inbuilt in the system. Committed to social causes with a rich legacy of 134 glorious years, KMV has taken lead to organize a peace rally to demand speedy & severe punishment for the Rapists. 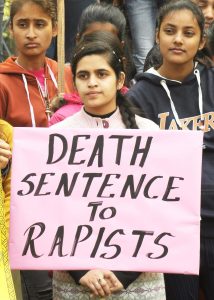 The rally was organized in the wake of recent gang rape & murder that took place in Hyderabad. This awareness rally for demanding the severe punishment for the rapists was flagged off by Principal Prof.(Dr.) Atima Sharma Dwivedi. More than 500 KMVites displayed placards with thought-provoking slogans written on them. 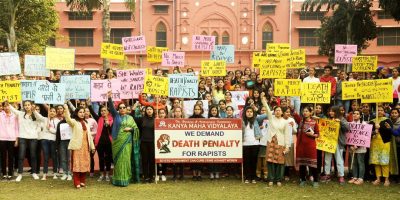 The whole ambiance resounded with anger over the system & students also raised spirited slogans like, ‘Ostracization and Public Shaming for Rapists’ &  ‘We Want Justice’ etc. Addressing the students during the rally, Principal Prof.(Dr.) Atima Sharma Dwivedi averred that the whole nation is in a great shock after this horrific incident of rape & murder. We the whole KVM family demands that our Indian parliament should make a very strict & severe law for the rapists so that no one should dare to commit such heinous crimes again. She expressed that it is only exemplary punishment that will deter the criminals. 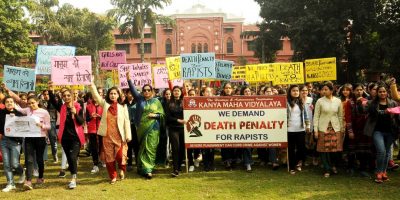 Rape is a more heinous crime than murder, she said. These type of cases should be tried in fast track courts only so that speedy justice could be delivered to the victim. Madam Principal also appealed to the students that they should raise their voice against all sorts of injustice in society. She further maintained that every girl should be able to master the art of Self-defence so that she should be able to defend herself against any kind of alarming situation. As a matter of fact, KVM from time to time conducts self-defense classes for the students in order to empower them for their future. After the address of Madam Principal, teachers & students also shared their opinions regarding the issue in which the student fraternity besides seeking justice for the victim, also demanded a swift investigation and a proper forensic arrangement to stop any further delay in the inquiry process of the heinous crime

Essay Next Day – Tips to Writing an Essay the Simple Way