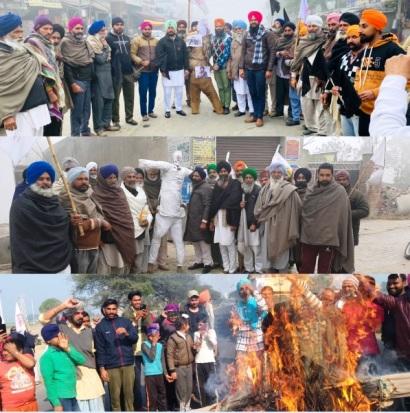 Ferozepur, January 1, 2021: Despite accepting two demands of the farmers out of four and fixing the next round of talks on January 4, the farmers under the banner of Kisan Mazdoor Sangharsh Committee – KMSC, Punjab also continued with their agitation against the three black laws even after passing of 100 days.

The farmers are protesting at Delhi borders for more than a month at Delhi borders for repealing the three farm laws and got support to their peaceful agitation, from almost all the classes of the society including the employees, singers, teachers, social activists etc.

KMSC in protest burns the effigies of Modi in the Zones of the district at Makhu, Mallwanwala, Zira, Mamdot, Guruharsahi, Jhoke Tehal Singh and Ferozepur.

Disclosing this to the media persons, KMSC spokesman Baljinder Singh Talwandi said that the three farm laws are anti-farmers and just like the issuing of death warrants of the farmer’s community.  The various governments since the independence of India in 1947 have been using the farmers for their vested interests at the time of elections.

He said, with the introduction of these laws by the Modi government, the farmers and laborers will be phased out of the farming profession and farming will be entirely at the mercy of corporate houses who will exploit the masses on a large scale by buying foodgrains at cheap prices and creating food shortages in the market and later on selling them at high prices.

Adding he said, our protest is continuing even after 100-days at Gehri Madi, Jandial Guru Amritsarl and will continue at Kundli-Singhu border in Delhi, as the farmers at dharnas are in high spirit, even if we have to celebrate the other festivals like Lohri, Maghi on the roads,  till the repeal of these black laws.