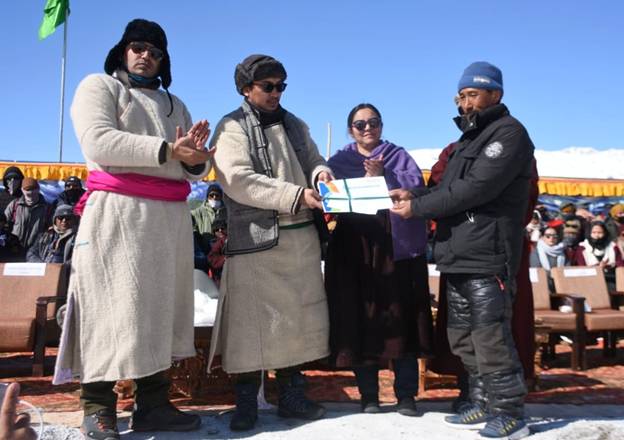 New Delhi Jan 31,2021: The 13 day long Khelo India Zanskar winter sports and youth festival concluded at Zanskar Valley of the Union Territory of Ladakh. The festival first of its kind was organized by the Department of Sports & Youth Services under the Khelo India banner in collaboration with the Ladakh Tourism Department.

The festival was organized to showcase the potential in adventure tourism and sports and aims to open a new arena in Ladakh for adventure and economy. It is one of the biggest events that has been organized to promote winter tourism in Ladakh. The 13day long festival was started on January 18th and concluded on Saturday, January 30th 2021. Member of Parliament (MP) Ladakh Jamyang Tsering Namgyal was the chief guest on the occasion while Councillor Cha Constituency Stanzin Lakpa was guest of honor. Speaking on the occasion, Member of Parliament Ladakh  Shri Jamyang Tsering Namgyal said that the event is a great achievement towards promoting winter sports and tourism in Ladakh. He elaborated that so far tourists would visit religious places and other sites only, but this event will change the scenario in terms of expansion of economic activities and tourism.

Sh Namgyal thanked and appreciated the role played by UT administration and other concerned departments in making the event a huge success.  He said that in upcoming year the event will be prolonged for around 70 days including trekking on the Chadar Trek.

Secretary Sports Ravinder Kumar in his address appreciated the efforts of the MoS Youth Affairs and Sports, Shri Kiren Rijiju, MP Ladakh Jamyang Tsering Namgyal, Department of Youth Services and Sports UT, Ladakh, Department of Tourism UT Ladakh, other concerned agencies and individuals besides the people of Zanskar for their efforts in making this event a successful one.

“I assure you that this event will be conducted with much efficiency and affectivity next year. With support from the Ministry of Sports, GoI we will assist in infrastructural development, equipment procurement and other necessary assistance”, said Kumar.

Speaking on the occasion, Director Tourism UT Ladakh Kunzes Angmo said that Zanskar has potential for winter tourism and adventure, for which the Department of Tourism Ladakh will strive to develop necessary requirements. The winter festival showcased a host of outdoor activities and sporting events like ice hockey, snow skiing, yalk and horse riding, ice climbing and archery. Events of social and cultural importance like snow sculpting, food festival, yoga and meditation were also the part of the festival.

Appreciation certificates were distributed among athletes, coaches, organizers and other participants. Various sporting teams, Zanskar students Association and other cultural troupes presented colourful folk songs and dances on the occasion. Around 700 people from various different parts of Zanskar participated in the event.

Pertinently, the Union Sports Ministry plans to provide sports facilities in all regions of Ladakh. It aims to promote Ladakh as a centre for Ice Hockey and soon open a center for archery and polo in two areas in the region.