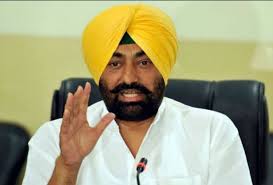 In a statement issued here, Khaira said that Punjab Chief Minister had promised to pay the arrears of payment of cane growers for the last year and also committed to pay the difference of Rs.25 per quintal in the price of sugarcane announced by the state government and agreed by the sugar mill owners. Chief Minister had announced that the state government will pay Rs 25 per quintal on sugarcane to the farmers directly out of the state advised price (SAP) of Rs 310 per quintal, while remaining Rs 285 per quintal would be paid to them by the private sugar mills,

He said that cane growers were sitting on dharna in front of Dhuri, Phagwara and Bhogpur sugar mills. The Chief Minister had failed to fulfil his commitments leaving the farmers in the lurch.

Khaira said that most of the nine private sugar mill owners are either directly Congress or SAD political leaders or the powerful mill owners exercise great influence on the Chief Minister, as they are a great source of funding for the corrupt traditional parties of Akali Dal and Congress. Khaira said while Rana Gurjit Singh and the Chadha family of Kiri Afghana sugar mill are blue-eyed boys of Capt. Amarinder Singh, Jarnail Singh Wahad who owns the Phagwara sugar mill is a close aide of Sukhbir Badal. Similarly, DP Yadav a powerful politician of Uttar Pradesh and owner of Dasuya and Dhuri sugar mills has connections with both Capt. Amarinder Singh and the Badal family. Khaira said it is but natural that Capt. Amarinder Singh and the Badal family have always thrown their weight with above-stated sugar barons at the cost of indebted and devastated farmers of Punjab.

He said that sugar mills had sold out the sugar stocks of the last two years and earned their profits but farmers were not paid for their produce. He alleged that the Chief Minister was hand in glove with the sugar mill owners who have strong political affiliations in Congress and SAD.

Khaira said that state government had released payment of cooperative sugar mills while private sugar mill owners are holding the payments. The millers have a liability of about Rs.192 crores towards farmers. He said that sugar mill owners had agreed to pay the dues at the time of starting sugar cane crushing.

He demanded strict action against the defaulter sugar mills and demanded to ensure hand to hand payment of sugarcane arrears along with 10 per cent interest to the farmers who are already under stress due to debt.

MP.MLA and DC exhorts youth to strengthen  ethos of Democracy as trubute to Ambedkar