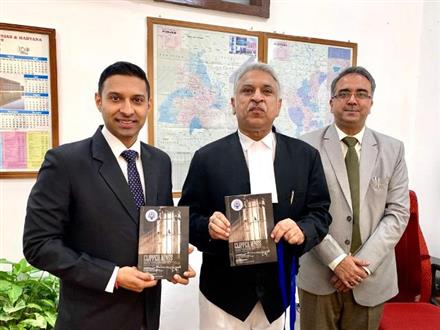 Chandigarh, October 19, 2019: Justice Jaswant Singh, judge Punjab and Haryana High court-cum-executive chairman, State Legal Services Authority, Chandigarh (SLSA) released a research report titled “Clipped Wings—the impact of incarceration on family members of prisoner, an exploratory study here on Thursday. Mahavir Singh, member secretary, SLSA; Chandigarh, Amarinder Sharma, Judicial Magistrate-cum-Secretary, District Legal Services Authority (lead researcher) and the co-researcher  Neil Roberts, Project Coordinator, District Legal Services Authority were also present.
Justice Jaswant Singh, in his message has stated that family members of incarcerated people have often been faced with financial, social and emotional costs related to the imprisonment of their loved ones. When people were serving time in prison, the family members must adjust not only to the physical absence of their loved one, but also to a void in the place of the monetary and practical contributions which that person made to the household and the encumbrance of a set of challenges and costs specifically associated with maintaining a relationship with a prisoner,” said he.
Speaking on the occasion Mahavir Singh stated that one of the key areas of intervention that has been entrusted with the Legal Services Authority was providing legal services to all persons in custody, whether through Legal Aid Cell in the Jail or Legal services in Observation cum special Home. NALSA in October 2018 had launched a campaign with “Prisoners lodged in Jails” to ascertain their requirement for specific interventions, in which a total of 453 prisoners were covered, he added. Thereafter in May 2019 the campaign to “Ascertain and provide need-based intervention to family members of prisoners” was launched, under which 478 prisoners were interviewed. Under the plan following category of prisoners were covered–Convicts having a remaining period of imprisonment of 6 months or more and UTPs having a period of detention for continuous one year or more
Singh further stated that after the interviews, a total number of 140 families from Chandigarh and 103 families from other states were identified for intervention. These families were provided with widow/old are pension; financial assistance to the families;  re-admission of drop-out children in schools; vocational training and employment to their spouse; counseling services besides provision of health services.
Speaking about the research study the Lead Researcher Amarinder Sharma stated that out of the 140 families who were covered in the campaign, 84 families consented to participate in the program.