Home » Jail Bharo protest by the INLD on the SYL issue is nothing but an attempt to deceive  public, Supreme Court already gave judgement, Manohar Lal 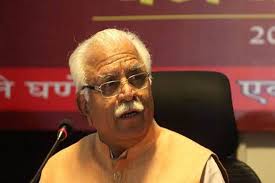 Chaang ( Bhiwani) , July 152018 :  The Haryana Chief Minister,  Manohar Lal, has said that the Jail Bharo protest by the INLD on the SYL issue is nothing but an attempt to deceive the public as the Supreme  Court has already given judgment on this issue, and another judgment is expected to be delivered soon. This issue has been hanging fire for the last 40 years.

Stating this while interacting with the representatives of panchayats and the people on the premises of a school in the village of Chaang in Bhiwani today, the Chief Minister said  the Prime Minister, Narendra Modi,  had increased the MSP of Kharif crops by giving the farmers  50 per cent profit  as recommended by the Swaminathan Commission Report. The MSP of millet (Bajra) has been increasing from Rs 1,450 to Rs 1,950 which would bring prosperity to the farmers of the state.

The Chief Minister assured the villagers that the government would take care of the development of the village. The work of building a bus shelter has already been awarded to the Bhiwani District Council. The Council which earlier got hardly Rs 1-crore grant has now been given Rs 18 crore for development works.

All developmental works would now be executed by the panchayats, panchayat samitis and Zila Parishad. Every village panchayat has been given Rs 50 lakh to Rs. 2-crore grant to carry out these works.  And in future, this budget would be further increased.

The Chief Minister assured the public that work on all announcements made by him would soon be executed. He urged the representatives to clear the payment of electricity bills of their respective villages. He applauded the punches and sarpanches of Padhi Likhi panchayats for the success of campaigns like the safety of women, Swachh Bharat etc, and told them to ensure that the level of education is raised.

All the 126 large villages having a population of more than 10,000 each would be provided facilities on the pattern of the urban model. Under a comprehensive water conservation plan, daily drinking water availability in the rural areas would be raised to 130 litres per person. Sewerage lines would also be laid in the villages.

On this occasion, the Chief Minister inaugurated a 33 KV substation in Kharak Kalan constructed at the cost of Rs 5.5 crore. An expenditure of Rs. 230 crore has been made on the development of Bawani Khera. On the development projects approved for the area today, an additional sum of Rs. 40 crore would be spent.

The Chief Minister said the government was working for the welfare of every citizen without any discrimination and the people too should recognize this effort and co-operate with it.

“In Haryana, BJP may be the ruling party but I believe that the government belongs to each and every person. Keeping this in mind, we are working for the welfare of all parts of the state and every section of the society,” the Chief Minister said adding that Seedhi Baat would be organized in all the 90 Assembly constituencies of Haryana.