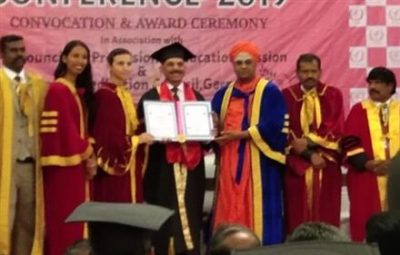 Malout (Punjab).December 5,2019:  Dr. Rajinder Kumar Uppal, a prolific writer, an outstanding academician and the more ingenious guide has won accolades not only in the academic field but also in the genre of research. Presently, he is serving as an associate professor of economics at DAV College, Malout (Punjab) and Principal Investigator of a UGC-Funded Major Research Project on Indian Banking.

Dr. Uppal, recently honored with honorary D.Litt by the International Peace University during the convocation held at Pondicery. The doyen of economics who hails from educationally humble area of Punjab completed his post graduation and Ph.D from Punjabi University, Patiala. He is considered as master of professional academic work. As a matter of fact, his research fervor and academic zeal primarily focuses upon banking and finance.  He heralded a new era of globally competitive Indian banking system. He authored/edited seventy two books and since 2014 some of his books earned global recognition with Google scholar citation such as 548 h-index 11 and i10 index is 15.

Amongst his prominent books Indian Banking in the Globalized World-2013, Information Technology in Banks- A New Gateway for Sucsess-2018, E-Age Banking – A Future Outlook-2018, Banking with Technology- A New Vision 2020 have won an array of laurels. Through his books, he envisaged the challenges and opportunities regarding the use of e-banking particularly in public sector banks. He was instrumental in suggesting the reforms in e-technology. His prodigious research talent gave him leverage to write as many as two seventy five research papers on banking and finance. He presented seventy two research papers in different national and international conferences. His claim as a researcher was never unfounded as eight of his research papers were lauded at different international conferences held at Hawaii, Indonesia, Finland, Costa-Rica, Australia, London and Pakistan respectively. His insatiable craving for research got stimulus under the aegis of UGC and HRD. As many as seven major post-doctorate research projects were funded by UGC, ICSSR and HRD, New Delhi. He reciprocated successfully and harnessed his research skill with incredible finesse and ease. His able guidance inspired

even many young teachers to wade into the ocean of research and he produced sixty two M.Phil and eight Ph.D in this process.  Although, it is not possible to circumscribe his comprehensive achievements into a finite space, yet the pile of his degrees and awards speaks volumes of his marvelous eruditeness.  His services were acknowledged at different forums from time to time. He was even awarded Honorary D.Litt degree by reputed Business University, Costa Rica in 2014.  His monumental work encouraged various national organizations to honor such an inclusive academic stalwart with Jewel of India Award, Best Educationist Award, Shatiya  Shiromani  Purskar, Pride of India Award and Excellent Research Award by PCMA respectively. This colossal figure earned Life Time Achievement Award from Dashmesh Girls College, Badal for his exemplarily service to the cause of education.

He is presently working in advisory board of editors in national and international reputed research journals. While serving as chief-in- editor of reputed research journal he explored his worth in other areas as well. He wrote as many as fifty articles for leading Indian Newspapers on current social and economic issues. He was invited for expert talks on the relevant issues by various govt. and private TV Channels and All India Radio, Jalandher. He designed syllabi of UGC job oriented courses such as e-banking and e-commerce from Certificate level upto advance Diploma. He also mentors young teachers to yield quality research under faculty development programme. His academic and research works holds promise for his society as his plea of merger of banks eight  years back has been implemented by the  present Indian dispensation. He has also submitted his D.Litt thesis on the very burning topic, “Managing Transformation in Indian banks Through E-Delivery Channels- Challenges and Opportunities” in Utkal University, Bhubaneswar, Orissa, India in 2016.

He desires to restructure and revolutionize Indian banking   Industry by linking it with e-technology thereby ushering a new era of competitive banking system nor only at home but also at abroad. For him, research is a never-ending process. The loss of human resources due to cancer has again caused a stir in his indefatigable research mind and he has embarked on a new project i.e “An empirical Study of Loss of Human Resources with the Extensive Penetration of Cancer in the Malwa Belt of Punjab and its Future Perspectives.” Infact, he is an asset for the society. His works and publications amply bore the insignia of his academic pedestal in a short span of time.

IKGPTU will provide “Kindle” Service to its students and faculty