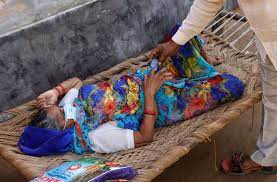 PARSAUL VILLAGE, 22 May 2021 – An Indian former hospital worker with no medical education is running a small unlicensed clinic, tending to patients with breathing difficulties and checking their oxygen levels as they lie on cots on the mud floor.

India has been hard hit by the second wave of coronavirus infections which has overwhelmed its health system, even in big cities.

In the countryside, medical facilities are dilapidated and doctors and nurses are few on the ground, meaning many clinics are run by people who don’t have training.

The poor health infrastructure and lack of testing mean many patients do not know if they are infected with COVID-19 or just have a cold.

In Parsaul village, about 60 km (40 miles) from the capital New Delhi, villager Ashok said people in his area were afraid to step out of their houses. He suspects that coronavirus had killed around 15 people nearby in recent days.

Ashok has come with a patient who had a fever to the clinic run by a 52-year-old former hospital assistant who moves from one cot to another to check IV levels. Empty intravenous drips lie piled up under a brick-walled staircase.

“Patients with fever and breathing problems have increased in the last two months,” said the former assistant, who said he had been helping patients at his clinic since 1993 but did not wish to be identified as he feared a backlash from authorities.

“The people from nearby six or seven villages know me personally and trust me.”

Some patients wore face masks lying on cots, while others had their faces covered with clothing.

Bubli, 30, visited the clinic to get treatment for fever.

“No, she doesn’t have COVID, it’s just a fever,” Bubli’s husband told Reuters. “…We are scared of COVID, but going out to a big hospital is more dangerous.”

Total infections in the country stood at 26.3 million on Saturday, the second-highest in the world after the United States, while the country’s total death toll was 295,525.