Our Correspondent:
DODA, AUGUST 15,2019 : The 73rd Independence Day was today celebrated with national fervor, enthusiasm and gaiety across Doda District. The main function of the Independence Day celebrations was held at the Sports Stadium Doda where Deputy Commissioner Doda, Dr. Sagar D Doifode unfurled the National Flag.
After inspected the parade, the Deputy Commissioner took salute of the 22 March past contingents drawn from the JK Police, IR 5th Bn, CRPF 76Bn, FPF, Home Guard, NCC and School children.
Addressing the gathering, the DC underlined the need for maintaining sustained peace and tranquility to realize the cherished goals of growth and development in the district. 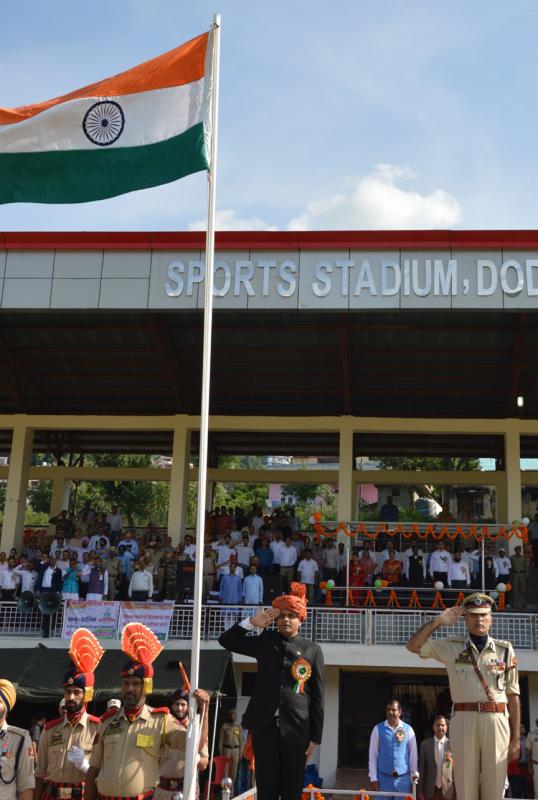 Paying rich homage to the heroes of Indian freedom movement, the DC said that the independence achieved by their sacrifices can be protected by maintaining peace, tranquility and harmony in the district. He also paid respectful homage and salute to the brave hearts of the JK Police, Paramilitary and the Army who made the supreme sacrifice to preserve the territorial integrity of our country.
The DC highlighted various initiatives which were implemented in the district in the last six months including Back to Village programme and also briefed about various CSS schemes like PMSYM and Ayushman Bharat and informed that thousands of beneficiaries are already getting the benefits of these schemes.
He further given out the District Administration is giving 100% effort to improve the quality of education in the entire district for which Zimedari-ek ehsaas project was initiated.
For the disposal of public grievances at doorstep, the DC said that district administration has conducted more than 70 darbar and more will be conducted in the future for the proper disposal of the issues at the micro level.
The DC said that various important mega developmental projects including Pul Doda-Beoli road, construction of PMGSY roads, CRF roads, construction of multipurpose indoor hall, construction of newly sanctioned GMC doda will not only improve the road connectivity of the region in the upcoming times but also ease the life of common masses in true sense.
The DC highlighted the recent development made in the health sector like the re-establishment of Ayush Hospital, functioning of the Dialysis centre and also told that many new courses are going to start soon in the newly established GMC Doda. He also highlights achievements made in higher education sector in the district.
The DC also congratulated the people of rural areas for their active cooperation for successful holding of the Panchayat Elections in the district. He stated that the budding Panchayati Raj system will be the harbinger of change in the district.
The DC further informed that district administration for the proper guidance of the aspiring candidates of civil services has recently issued a notification, under which free coaching will be provided to the 100 aspiring candidates by the qualified candidates of union and state services and appealed the students to come forward and be a part of this initiative for their bright future.
A scintillating cultural programme was also presented by the school children on the occasion and the prizes were distributed among the parade Commander and best performing government employees in public services.
SSP Doda Mumtaz Ahmed, ADDC Doda Imam Din, ADC Doda Kishori Lal Sharma, SP Operations, Ravinder Pal Singh, MC President Ved Prakash Gupta, Counsellors of Various wards, besides officers of District Administration, Police, Army and Para Military forces, besides senior politician and prominent citizens were present on the occasion.
At Bhaderwah, Additional Deputy Commissioner Bhaderwah, Dr. Ravi Kumar Bharti unfurled the National Flag and took salute at March past contingents.
Similar functions were also held at all Sub Divisional and Tehsil levels across the District where Sub Divisional Magistrates and Tehsildars respectively unfurled the National Flag and took salute of the March past contingents.