Home » I’m neither spineless nor a traitor to farmers like you Badals,’ says Capt Amarinder 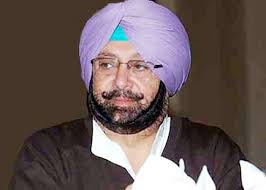 I’m neither spineless nor a traitor to farmers like you Badals,’ says Capt Amarinder
Asks Sukhbir ‘when did any ED cases stop me from fighting for my people?’
Slams Akali chief for undermining Pak threat to national security in desperate bid to save sinking SAD ship
Chandigarh, December 5,2020 : Terming Sukhbir Badal’s latest tirade against him as utter buffoonery, Punjab Chief Minister Captain Amarinder Singh on Saturday said no ED cases had ever stopped him for fighting for his people, nor was he spinless or a traitor to farmers like the Badals.
The Badals, who were totally cornered over their betrayal of the farmers, had clearly pressed all the panic buttons in their desperation to cover up their brazen treachery, said the Chief Minister, in a scathing reaction to Sukhbir’s remarks on ED cases against his family and his allegations of `surrender to blackmail.’
Such is their level of despair that Sukhbir even stooped to undermining the Pakistani threat to the security of Punjab and the nation, said Captaining Amarinder, terming it a betrayal to the security forces battling the enemy at the borders every day at the cost of their lives.
“Have you and your Shiromani Akali Dal (SAD) become so power-hungry that you have even closed your eyes to the threat posed by the Pakistanis to our security? Are you saying that all those arms, ammunition and drones our brave security forces have captured along the Punjab border are no danger?” he asked while adding that it seemed that Sukhbir had totally lost it.
As for the ED cases, the Chief Minister asked Sukhbir, “What is new about the ED cases against me or my family that I should suddenly start trembling?” He and his family had been fighting ED and other cases for years, he pointed out, adding that not one of these cases had ever stopped him from risking everything for his people.
In a scathing response to SAD president’s allegation that he  (the Chief Minister) had “surrendered to BJP’s blackmail”, Captain Amarinder quipped, “Do you even know the meaning of blackmail?” “It was you and your party who had been *pandering* to BJP’s interests and giving in to their pressure as their allies all these years,” he added.
The Chief Minister said “had I succumbed to so-called blackmail, I would not have brought the amendment Bills in the state Assembly but, like Delhi CM, would have notified the central laws long ago.” So stop lying and misleading the people, he said, adding that nobody was going to be taken in by these falsehoods of the Akalis, whose double-speak on the Farm Laws and the farmers’ issues had been exposed more than once. “Whose blackmail did you surrender to when you did a U-turn over the state amendment Bills after backing them in Vidhan Sabha?” he asked Sukhbir.
Trashing Sukhbir’s lies, Captain Amarinder further asked the Akali leader what “warning” he was referring to. “Can you cite even a single instance when I asked the farmers to withdraw their agitation?” he asked, adding that it was evident that like Harsimrat Badal, Sukhbir Badal had no understanding of plain and simple English. “Don’t you know the difference between urging farmers and Centre to find an early solution and issuing a warning?” he asked Sukhbir.
The theatrics and lies of the entire Badal clan are not going to help them salvage their reputation in the eyes of the farmers, or the rest of Punjab, said the Chief Minister, pointing out that not long ago, all of them were openly and publicly backing the central laws and are now claiming to be the messiahs of the farmers. The people still haven’t forgotten Prakash Singh Badal’s videos supporting the farm laws of the central government, nor have their forgiven Harsimrat for stamping her approval on the ordinances as member of the Union Cabinet, and nor have Sukhbir’s charades and flip-flops on the issue gone unnoticed, he added.