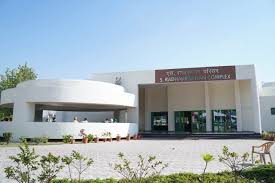 Ropar, October 20, 2020: Indian Institute of Technology Ropar (IIT Ropar) will be virtually inaugurated on 22nd October by  Union Minister of Education,   Ramesh Pokhriyal Nishank and Minister of State, Ministry of Education  Sanjay Dhotre. The ceremony will begin on October 22, at 03:00 pm. Established in 2008, the Institute has turned 12 this year with Lush green campus on 500 acres of land at the bank of river Satluj, 10 Departments and 2 Centers, 2324 students, 170 faculty.

The inauguration ceremony will be broadcasted on different social media platforms, including Twitter, Facebook, and LinkedIn pages of IIT Ropar.

This will be a special day when the entire institute has a chance to reflect upon not only the beginning of the institution but also on the significant development since the institute’s inception.

IIT Ropar has figured consistently among the top-ranking educational institutions in the country and abroad. IIT Ropar has shared the top place in India after IISc Bangalore with its position in the 351-400 rank in Times Higher Education World University Rankings 2021. In fact, IIT Ropar has been ranked as number one in the world in research citations. In NIRF, IIT Ropar stood 25th in all India Engineering institutional ranking 2019-20. In QS India Rankings 2020 with an overall rank of 25th in India, IIT Ropar is ahead of all IITs in research quality, scoring highest in Citations per Paper.

In June 2019, IIT Ropar announced the shifting of its Central Administration to the Permanent Campus along with other academic Departments like Electrical Engineering and Mechanical Engineering, Computer Science and Engineering. It marked the beginning of an era in the history of IIT Ropar to occupy its own final seat of learning.

With a state-of-the-art infrastructure on a built-up area of 1.37 lakh sq.mt comprising of housing for 2324 students, 170 faculty and 118 staff members, magnificent entrance, cutting-edge laboratories, libraries, sports facilities, spaces for other extra and co-curricular activities and the unique design of the hostels with large common spaces, the Institute has come alive. The Institute is on track towards completing 2.32 lakh sq.mt of construction by the year 2021 to provide accommodation for 2,500 students, 220 faculty and 250 staff members.

A Super Academic Block is coming up to house 7 academic departments in a total area of 4. 76 lacs sq.ft area. The Central Library and Auditorium with a capacity of 800 seating will be ready by the winter of 2020. Our campus is a green campus with zero water discharge and a five-star GRIHA rating with special drive going on to make it greener and sustainable.

IIT Ropar has a unique curriculum. According to it, the students can  opt for minor, concentration and additional 6 months internship program along with the basic B.Tech. degree.

The entire environment at IIT Ropar is planned to give a conducive atmosphere for holistic learning – to focus on the development of personality as a whole. The placement results from October 2019 to March 2020 at IIT Ropar have been very encouraging. An encouraging response from the industry was observed for the campus recruitment process as a result of which 85 % of our students were placed.

IIT Ropar is committed to demonstrating its further resilience and agility with sincere efforts via all routes in the academic, research and innovation domains that have and will yield results in the coming years– establishing it as a prominent global institution, in the service of the nation.