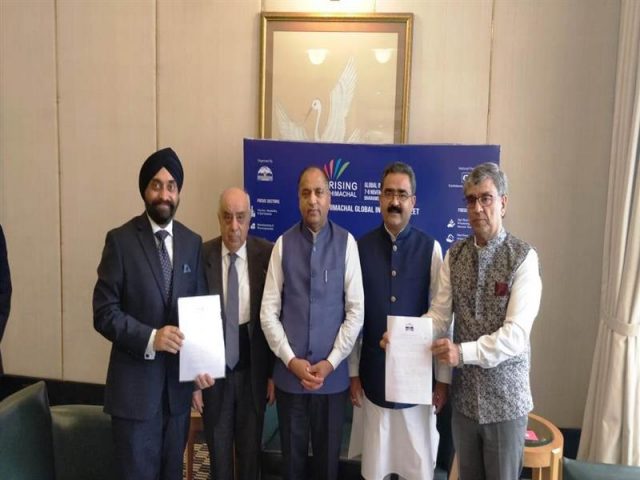 Shimla, June 28, 2019: The state government signed an MoU worth Rs. 300 crore with M/s Mahindra Resorts for investment in Mahindra Resorts at Kandaghat (Solan district), Janjheli and Koldam (Mandi district) and Dharamshala in the state in presence of Chief Minister Jai Ram Thakur at Mumbai today. Chairman, Mahindra Holidays and Resorts Arun Nanda was also present on the occasion.
The Chief Minister also had Business 2 Government (B2G) meetings with heads and representative of industrial houses at Mumbai. He met Chairman RPG enterprises Harsh Goenka and discussed investment in IT park at Waknaghat in Solan district.  Harsh said that the company was also looking at the plantation as it was the largest company in tea and rubber plantation. The company was looking at possible options in the state. The government suggested that contract farming was suitable for plantation in Himachal Pradesh.
Jai Ram Thakur had a meeting with representatives of D.P. World that showed interest in investment in the logistics sector and dry port at Baddi. The state government suggested D.P. World submit a proposal for the same so that the possibility of the logistic park could be explored in Baddi area.
The Chief Minister also had one to one meeting with Chief Counsel India and EMEA, Mondeleze India, Sree Patel, COO United Phosphorous Limited Sagar Kaushik. The firm is into horticulture and procures apples and oranges for distribution to retail stores. They shared a small presentation with the Chief Minister about the firm, its products and expansion plans in India. The company is looking at post-harvest technology to increase the shelf life of fruits currently being procured from Himachal Pradesh. The company also submitted a proposal for expansion of the existing facility in Himachal by five times in procurement of apples.
Jai Ram Thakur had another meeting with Chairman, Foods and Inns Limited  Bhupendra Dalal. The company is into exports of mango pulp and is looking at investment in the food processing sector.
The Chief Minister held a meeting with MD and CEO, ACC Limited Neeraj Akhoury regarding expansion plans in Chamba district. In addition to this, he had a meeting with Executive Director, Reliance Group Nikhil Miswani and discussed regarding retail, agri marketing and hospitality, etc.
The Chief Minister invited the entrepreneurs to be part of the Global Investors Meet being held at Dharamshala.
Industries Minister Bikram Singh, Additional Chief Secretaries Dr. Shrikant Baldi, Ram Subhag Singh and Manoj Kumar, Principal Secretary Prabodh Saxena, Director Industries Hans Raj Sharma, Special Secretary Abid Hussain Sadiq, Principal Private Secretary to the Chief Minister Vinay Singh were present on the occasion among others.