Home » Hindus fearful in Indian Kashmir after wave of assassinations 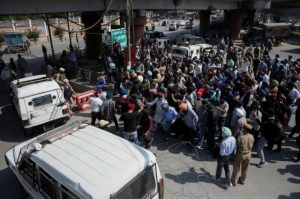 SRINAGAR, Oct 9, 2021 – Small groups of militants armed with pistols have carried out a spate of targeted killings in Indian Kashmir, sowing fear among some minority communities, according to security officials and residents.

At least 28 civilians have been killed by suspected militants this year in the Muslim-majority region, which has been wracked by an armed insurrection against New Delhi since the 1990s.

Kashmir is claimed in full by both India and Pakistan but ruled in parts by the nuclear-armed neighbors.

Although most of those shot dead recently have been Muslims, the killing this week of a number of Hindus and a Sikh led police to say that religious minorities were now being targetted.

Two teachers – one Hindu, one Sikh – were shot dead inside a government school in the main city of Srinagar on Thursday.

In a statement on social media this week, TRF said it was not targeting people on the basis of their religion but those working for Indian authorities. Reuters could not immediately verify the authenticity of the statement.

“The (cells) are small and at least three dozen militants with pistols are operating in Kashmir with the main focus on Srinagar,” the official said, declining to be named.

Indian police have described the TRF as a front for Pakistan-based militant organizations like Lashkar-e-Taiba and Hizbul Mujahideen. Pakistan has said it only provides moral and diplomatic support to the Kashmiri people.

The TRF emerged in the wake of the Indian government’s move to split the former state of Jammu and Kashmir into two federally administered regions in August 2019.

Accompanied by a harsh lockdown and strict communications curbs, the decision was widely unpopular in the Kashmir valley and may have pushed more young people to take up arms, a security official said.

“They were desperate and now they have been provided small arms including pistols and grenades,” the official said, declining to be named.

Vijay Kumar, Kashmir Valley’s police chief, said militant groups had changed their strategy in response to a crackdown by security forces, but local authorities were already pursuing several leads into the recent spate of killings.

But members of the Hindu Kashmiri Pandit community, some of whom returned to the Kashmir valley after leaving during the early years of militancy, were unnerved by the violence.

“There is a lot of fear among the community members and we are afraid of coming out of our homes,” a Kashmiri Pandit living in the northern district of Baramulla told Reuters.

The senior police official said the recent killings of members of minority communities were aimed at preventing the return of the Kashmiri Pandits.

Omar Abdullah, a former chief minister of Jammu and Kashmir, appealed to minority community members not to flee, urging the local administration to provide better security.

“I believe these attacks are aimed to drive a wedge between the communities and to push them out of Kashmir,” Abdullah said, “We can’t let that happen.”