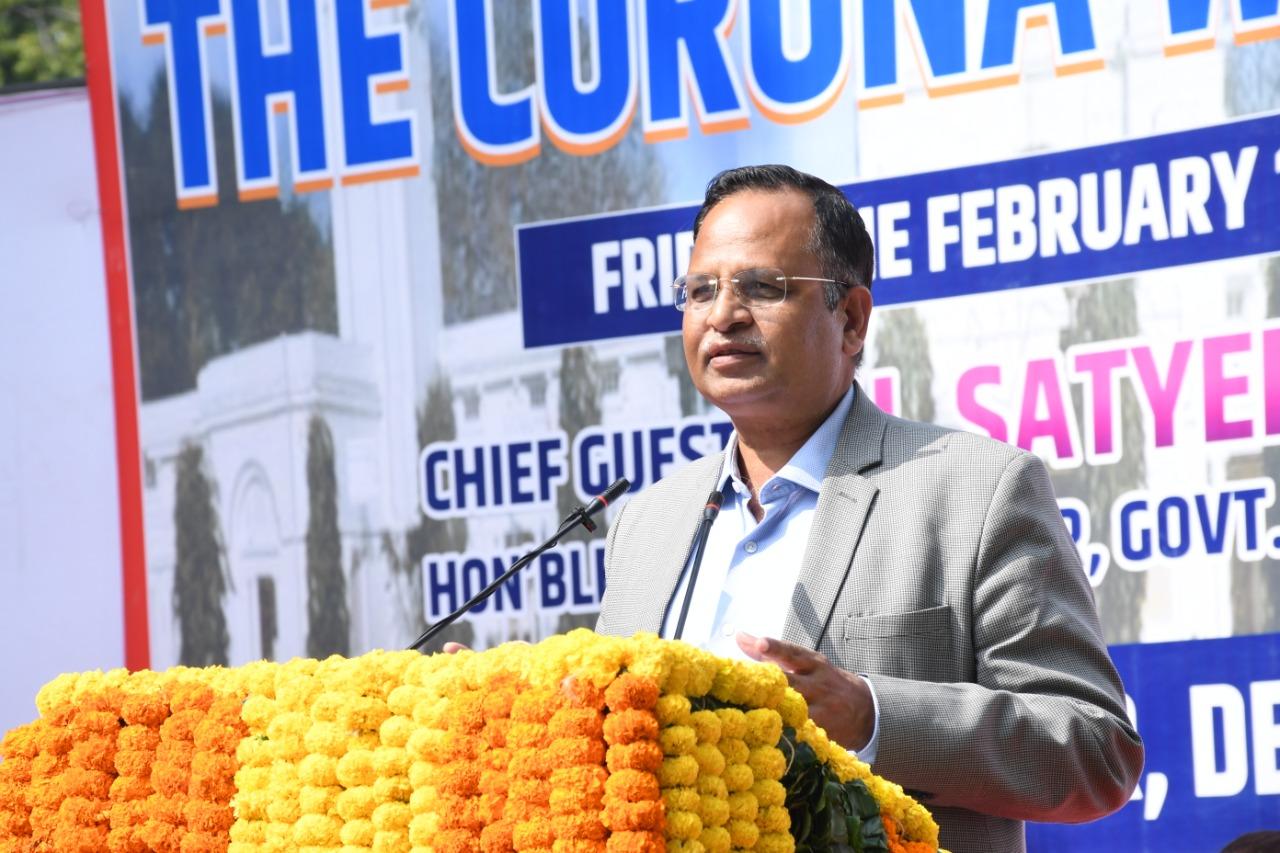 New Delhi February 19, 2021: Delhi Health Minister, Shri. Satyendar Jain, today, chaired the felicitation ceremony organized for 76 frontline workers at Delhi Vidhan Sabha to commemorate them for their effort and undeterred spirit. He applauded them and said that LNJP hospital has put up a brave fight against the virus. It is the only hospital that has treated over 11000 patients. He said the pandemic affected many lives, however, Delhi successfully managed to sail through the tough times. Delhi Government made calculated and well-thought-of moves, especially when it introduced the home isolation system which proved to be highly effective. At a time, when the focus was on ventilators, The Delhi Government was the first to take into consideration BiPAP and HFNC machines, and not stress on ventilators. The minister recalled all their efforts which ultimately led to the decline of the pandemic in Delhi. The Minister encouraged everyone to stay happy and said that it was because of their undying support that the state of the virus in the city is mellow. He stressed that immunity is the most important and the most important immunity booster is happiness. He urged everyone to remain happy and at peace while following all the precautions.

Speaking at this occasion, the Minister said, “LNJP Hospital put up a tough fight during the prevailing war against the Coronavirus. The hospital successfully treated more than 11000 patients. When the Delhi Government introduced Plasma therapy, the first trial was conducted at LNJP Hospital under the supervision of its very proficient staff. The very first plasma bank, started on the 2nd of July too, was established at LNJP Hospital. This pandemic put us all in a fix when it came to finding a solution pertaining to its cure. However, the Delhi Government, the doctors and staff at all Delhi government hospitals worked day and night to bring forth new solutions to fight this virus.”

Recalling the initial days, Shri Jain said, “I remember, when the pandemic broke initially, we were reviewing the situation, we heard the news from Italy and the situation of the patients there. There was no place in hospitals and the condition was lamentable. Delhi hospitals had 1500 patients who were suspected of the infection. However, only 300 were positive. Therefore, we made a calculated move after reviewing the situation and decided to introduce the world’s first home isolation system. People who were asymptomatic and showed minor symptoms were advised home isolation and were given regular check-ups including home visits from Delhi Government doctors. Ambulance services were sped up. 15 minutes was the maximum time it took for an ambulance to reach the designated location. The pulse oximeter was given to every patient and they were advised to monitor their oxygen levels. It was ensured that both public and private Hospitals had an adequate capacity of beds. LNJP hospital admitted every patient.  We purchased Bipap and HFNC machines in June when no one was considering it. We did not stress using ventilators as the first resort. LNJP was India’s first hospital fully dedicated to covid patients and the only hospital with 2500 beds.”

The Minister further added, “I want to applaud every member of the staff, for putting the interests of the public before their own. What they have done will act as an idol for the generations to come. The Coronavirus taught us many things first hand. It is only after the spanish flu of 1918 that such a situation has come into being. After almost 102 years, we are combating the coronavirus, a disease on the same lines. But, we effectively sailed through it even without a set protocol. Delhi is the only city in India that was fully prepared to combat every situation. We faced setbacks initially and faced criticism too,  but we took it positively to improve our fallouts. Today, LNJP hospital has CCTV cameras in every ward, there is a centralised monitoring unit. The place which was at the bottom at one point rose to surpass all expectations.”

“I feel now that all the three waves of the coronavirus have hit the city, it’ll die down eventually. Now it is no more a pandemic but an endemic. The infection will not be eradicated much like other diseases but the surge is on the wane. I hope we won’t see 8600 cases in a day. I feel we are out of the danger zone but we still need to take proper precautions, masks and social distancing needs to be maintained,” said Shri Jain.

Ending his address, The Health Minister encouraged everyone to stay happy and said, “I want to thank all of you for your support, as it is because of your undying support that we have been able to achieve this stage. And I want to say that immunity is the most important. The most important immunity booster is happiness. If you are stressed, the immunity level will be low. But if you’re happy and at peace, you’ll be fine.”