Home » Haryana to expand the scope of scale mapping in villages 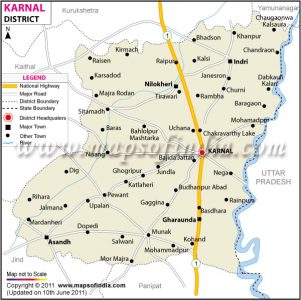 Chandigarh,March 21,2020  ( By YS.Rana ): In a bid to expand the scope of large scale mapping being carried out in five villages each of 15 districts and three towns of Sonipat, Jind and Karnal using drones. The Haryana Government has decided to further take up this work in all villages of the State in a phased manner. Sirsi village of district Karnal is the first village that has been declared free from Lal Dora. Following Sirsi, the next lot of 75 villages will soon be declared as “free from Lal Dora”.

A decision to this effect was taken in a meeting held under the Chairmanship of Chief Minister, Manohar Lal here to review the project for mapping of land properties and other features in the State being undertaken through Survey of India. Deputy Chief Minister,  Dushyant Chautala was also present in the meeting.

On this occasion, the Chief Minister also released the contour maps of Haryana at 5 meters interval for publication in the public domain which has been prepared by the Haryana Space Applications Centre (HARSAC), Department of Science and Technology, Haryana.  These contours on such a large interval will provide village-level information thus enabling the successful implementation of various government programs like Jal Shakti Abhiyaan, watershed management, water conservation activities and drainage works.

The Chief Minister directed that total area of Sirsi village, under abadi-deh, government land and agriculture land be compiled with and matched and if any difference is found, the same should be rectified. He said that besides demarcation, land titling should also be made so as to identify the ownership of land. He also directed to capture the area of State boundary by using drones across the interstate boundary.

It was informed that while the data acquisition using a drone in 75 villages of 15 districts has been completed, the process of data acquisition in the whole of Karnal and Sonipat district is underway.

It was also informed that initial base map of Abadi-Deh (Lal Dora) has been generated and printed for 3 villages in Sonipat, 5 each in Panchkula and Karnal, 4 each in Sirsa and Panipat and 5 villages in district Faridabad.

These 26 villages are ready for inviting objections or suggestions and further resolution or settlement of such objections within 7 days. The District Development and Panchayats Officer (DDPO) would be designated as a nodal officer for Abadi-deh area related activity.

Also, Unique IDs would be provided to each property or land in abadi-deh on the pattern of the Urban Local Bodies Department for urban areas. Necessary instructions in this regard have been issued by Development and Panchayats Department.

Earlier, the Chief Minister announced an award of Rs one lakh for the team of Survey of India for their outstanding contribution in making Sirsi village of district Karnal free from Lal Dora.