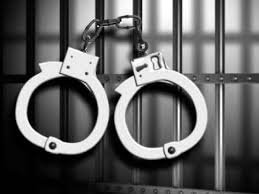 Chandigarh, Dec 12, 2019:  Haryana Police have arrested two persons who were declared proclaimed offenders by the Court in separate cases from Rohtak district. Both accused were absconding and evading the arrest for a long time.

While stating this here today, a spokesman of the police department said that in the first case, Police has arrested Jaipal, a resident of Sector-10A, Vasundhara, Ghaziabad in Uttar Pradesh, who was declared proclaimed offender by the Court in the year 2017.

Another proclaimed offender Bunty, a resident of Garhi Bohar presently residing at Tilak Nagar Rohtak, was arrested by the Police during a raid. A case relating to the Arms Act was registered against him in the year 2012. After coming out on bail in the said case, the accused absconded and did not appear in the court. The Court declared him proclaimed offender in the year 2013.

Cases were registered against them and the probe in the matter is underway.

With the use of Geographic Information System (GIS) and digitisation the benefits of welfare schemes can be effectively delivered to people.

Additional Chief Secretary and Financial Commissioner, Haryana Revenue and Disaster Management Department, Sh. Sanjeev Kaushal said that modern revenue record rooms would be ready by November 15, 2021 at all district headquarters of the state.

International Sarasvati Mahotsav-2022 will be organized at Pehowa Sarasvati Teerth from February 3 to February 5, 2022 in Kurukshetra, Haryana.