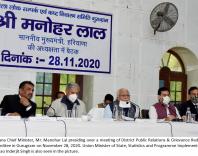 Chandigarh, November 28, 2020:  Haryana Chief Minister,   Manohar Lal today assured the millet growing farmers of the state that the  State Government is committed to buy every single grain of their millet crop. He said that the Deputy Commissioner will make adequate procurement arrangements only after conducting a survey of millet sown by the millet producing farmers of their respective districts and further verifying the findings.

The Chief Minister said this while interacting with the media persons after presiding over the meeting of the District Public Relations and Grievances Committee held in Gurugram today.

The Chief Minister informed that millet is being purchased at the rate of Rs. 2150 per quintal in the grain markets of Haryana, while in the neighboring state of Rajasthan, millet is being sold very cheap at the rate of Rs. 1300. That is why complaints about millet procurement from these states being sold in the State Mandis in the name of farmers of Haryana are being received.

Mr. Manohar Lal said that the procurement millet coming from the neighbouring state will not be allowed in the Mandis of Haryana, but the State Government is committed to procuring the millet of Haryana farmers. Farmers need not worry about this, he said.