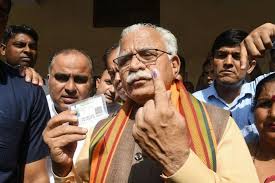 Gurugram December 25,2019 ( By SK.Vyas ): Haryana Chief Minister,  Manohar Lal today announced that the year 2020 would be observed as “Susashan Sankalp Varsh” during which suggestions and reforms in the field of governance would be invited from the people of the State. A dedicated website would also be prepared for this purpose on which the people could upload their suggestions. The best among all such suggestions to be received on the website would be considered by the State Government.

Manohar Lal made this and several other announcements to motivate government employees to work hard for the welfare of masses at the State Level Good Governance Day Programme at Gurugram today. The programme was telecast live in all 22 districts, subdivisions, tehsils and blocks through webcast.

He also announced three categories of awards for the outstanding employees including three awards within the department, three awards from all offices in each district and three at State level. In all, 500 awards would be given to the employees in the State on December 25, 2020.  He said that an arrangement of Digilocker has also been made where the employees could keep their certificates and other important documents. Similar to a bank locker, the facility would provide safe custody of documents to the employees and these could be taken out from the   Digilocker as and when required by them.

Earlier, the Chief Minister launched five new e-initiatives including the website of 22 districts, addition of 42 new schemes and services on the Saral Portal, Lokayukt Portal, integration of 91 Tehsils to Web Helris and digital map of village Sirsi (District Karnal) to make the village free from Lal Dora. The State Government has developed 22 district Websites using a secure, scalable and sugamya platform. All websites have an inbuilt content management system that enables nodal officers to easily manage and update the contents on the respective website. With the launch of an additional 42 new schemes and services on Saral Portal, the number of such schemes and services has reached to 527. These schemes and services pertaining to the 38 departments, boards and corporations are being provided to the citizens through more than 6000  Atal Seva Kendras and 115 Antyodaya Kendras throughout 22 districts of the State.

The ‘Lokayukta Portal’ has been developed with several features like acceptance of complaint or grievances, marking of complaints or grievances, inquiry of complaints, disposal of complaints, finalization of complaints, daily cause list, reopened disposed-off cases and monitoring reports. ‘Web-Helris’, which was also launched today, is a web-enabled integrated solution for deed registration and land records management. This portal provides the facility related to deed registration, mutation, jamabandi, khasra gridawari, issuing of copies of record and rights and integration with internal and external entities. The Survey of India (SOI) has started implementing the prestigious project of large scale GIS mapping of entire rural, urban and abadi deh areas. The pilot project of Sirsi village in district Karnal has been completed for the rural and abadi deh areas and field verification of Sirsi work has been done, making it first village of the state to become ‘Lal Dora free’.

Terming today as a historical day,  Manohar Lal said that today we are celebrating the birth anniversaries of our former Prime Minister late Atal Bihari Vajpayee and freedom fighter Mahamana Pt. Madan Mohan Malaviya. He also greeted the people of the State for Christmas. He said that five years ago in November 2014, Prime Minister Mr Narendra Modi had announced that every year December 25 would be celebrated as Good Governance Day. In the same series, today the sixth Good Governance Day was being celebrated. He said that Good Governance Day assumes a special significance as after assuming the office of Prime Minister of Country,  Atal Bihari Vajpayee had made an arrangement to ensure that the benefit of welfare schemes and services reached to the beneficiary standing last in the queue. Mr Manohar Lal said that there is no shortage of budget with the government but inspite of that beneficiaries remained deprived of their due benefits.

He said that fair and prompt delivery of services is a Good Governance in a realistic manner. People elected their representatives with some aspirations and it is the responsibility of government employees and officers to provide the common masses uninterrupted services nearest to their home. This, he said, could be possible through e-governance. He said that on the occasion of first Good Governance Day on December 25, 2014, the State Government had started e-registration and CM Window. He said that 6.75 lakh grievances have so far been received on the CM window, out of which 95 percent complaints have been considered.

Manohar Lal said that there are about 3.50 lakh government employees in the State and they all should work efficiently without any discrimination and simultaneously adhering to the timelines. He said that to ensure this, the State Government has fixed timelines under the Right to Services Act- 2014. People’s satisfaction is the key to government and he assured that in this process if any rule or law is creating hindrances, we would not hesitate to change the same, he asserted. He exhorted the employees and officers to introspect their style of working and approach as it would help them provide an effective solution to the problems of people. While giving success mantra to employees and officers, he asked them to work as SMART- Simple, Moral, Accountable, Responsible and Transparent way to become a smart employee or officer. He said that increasing the population is among the challenges which need to be addressed. Such problems or challenges should be visualized and advance planning is made.

While describing corruption as a big menace, he said that minimizing human interface and adoption of e-governance could go a long way in eradicating this menace from society. Besides, discretionary power should also be reduced. He said that Haryana did not belong to a single person but it is the state of 2.75 crore people and it is the responsibility of more than 3.50  lakh employees of the State Government to take the State to new heights of development, progress and prosperity. All employees have to work for the service of residents of the state. He exhorted them to work with honesty and without any favoritism and with the spirit of justice to all. He said that the Haryana Institute of Public Administration (HIPA) has decided to conduct refresher courses for all employees and officers to abreast them of the latest techniques and technology.

While referring to various path-breaking initiatives taken so far by the State Government since 2014,   Manohar Lal said that the prominent among these included abolishing interview process in government jobs of group B and C  category, merit-based recruitment in government jobs, implementation of e-registration at Tehsil level, e-bhoomi portal for purchase of land for development projects, Meri Fasal-Mera Byora online portal for farmers, Direct Benefit Transfer (DBT) system under which 46,000 beneficiaries have been benefitted in last 5 years and an amount of Rs 244 crore has been transferred into the bank accounts, e-PDS system, Ease of Doing Business under which entrepreneurs are being provided all necessary clearances within 45 days through Haryana Enterprises Promotion Centre (HEPC), Durga App for women security, gram sachivalyas in 1785 villages, Beti Bachao Beti Padhao Programme, online arrangement of building plan and occupation certificate.  He said that at present, 4200 villages of the State are getting 24 hours electricity supply under the Mhara Gaon Jagmag Gaon Yojana. The remaining villages would also be covered soon.

He said that work on another scheme namely Parivar Pehchan Patra is in progress. Under this scheme, a system would be prepared through which the people need not visit government offices to get the benefit of government schemes and progress instead they get the same at their doorstep. He said that this scheme would become a unique model of good governance in the country.

On this occasion, the Chief Minister also exhorted the employees not resort to agitations and dharnas to press for their demands and always help to maintain an atmosphere of peace, harmony and brotherhood in the State. He said they should be cautious of those divisive forces which try to create an environment against the government. He said that Haryana Government has taken several decisions in the interest of employees. Haryana is the first state in the country to give the benefit of the 7th pay commission to its employees.

Later, the Chief Minister also interacted with the employees of various districts through video conferencing.

Principal Secretary, Information Technology  Ankur Gupta said that under the leadership of Chief Minister Manohar Lal, various steps have been taken towards good governance. He said that Haryana is at number second position in terms of a cashless society as a digital transaction of Rs 295 crore has been made in the State. He said that out of the total applications on Antyodaya Saral Kendra, 93.45 percent have been processed out of which, 88 percent are within the timeline of the Right to Services Act.