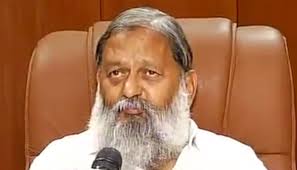 Chandigarh, December 12- Haryana Home Minister Anil Vij said that to further improve law and order in the state, recruitment will be carried out in the Police Department soon. For this, directions have been given to make a fresh assessment of the manpower requirement in the police force.

Vij said that a full review is being done in this regard and appropriate steps will be taken as soon as the report is received. He said that he has been receiving 500 to 600 complaints per day, which are mostly related to the police department. Therefore, information about number of pending FIRs and their pending time period has been sought from all the districts. On receipt of the report, strict action will be taken against the employees or officers concerned after examining the reasons for the delay in investigation. Information related to this can be given by any citizen of the state personally to him. The government is taking concrete steps at every level to break the drug chain in the state, the Home Minister asserted.

The Home Minister said that December 11 has become the golden day in the history of the country with the passing of the Citizen Amendment Bill in both the houses of the country. For this, he congratulated the Prime Minister Narendra Modi and the Union Home Minister  Amit Shah. He said that in the case of Panchkula, SHO has been given ‘Line Hazir’ and the action has been taken against others as per rules. Meanwhile, the woman has also changed her statement in the court. Despite this, the department is conducting a thorough investigation and has been directed to take strict action against the culprits. Vij said that the problem of students of World College of Medical Sciences and Research, Jhajjar, is being solved.  No student has been stopped from taking the exam, so they should keep preparing for their exam.