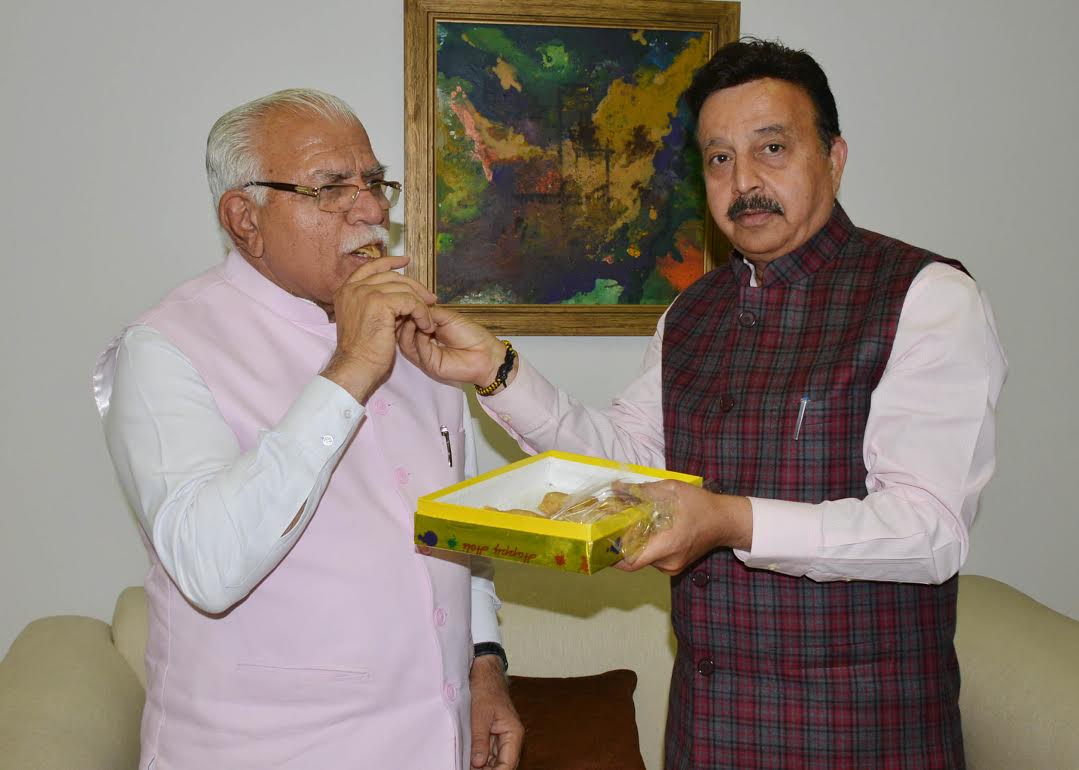 New Delhi, Mar 11–The Haryana Chief Minister,  Manohar Lal, has hailed the landslide victory resulting in the three-fourths majority of the BJP in the Vidhan Sabha elections in Uttar Pradesh and Uttarakhand and said that the people of these two states have given a befitting reply to the Opposition parties.
In a statement issued today, he congratulated the Prime Minister,  Narendra Modi, and the BJP President, Amit Shah, for bringing the party to power in the largest state of Uttar Pradesh with a stunning and unprecedented three-fourths majority. The Uttarakhand victory is equally impressive, he said
The credit for the opposition-wracking win in the two states goes entirely to the Narendra Modi-Amit Shah duo who worked assiduously and tirelessly to bring this about. It is a ringing endorsement of the policies and programs pursued by the Prime Minister.  A positive atmosphere has been created in the country under the leadership of Prime Minister
“I heartily congratulate the Prime Minister and the BJP President for the massive win. The massive victory in the two states is a ringing endorsement of the pro-people policies and programs pursued by the NDA Government at the Centre and shows that the people of the country are firmly behind the Prime Minister. More importantly, it puts paid to all criticism of demonisation which was never an issue in the elections”, Mr Manohar Lal added.
In fact, the demonstration has proved to be the game-changer in these elections and was perceived by the poor as a decision in their favor. Referring to the potential benefits to Haryana from the BJP victory, the Chief Minister said the party had emerged victorious on more than 100 seats in western Uttar Pradesh, which adjoin Haryana. BJP workers from Haryana had toured this area during the elections and Haryana would definitely benefit from the party’s victory.
Referring to Ram Mandir, Manohar Lal said it was never a poll issue and would never be one. This is a matter of faith. He called on National General Secretary (Organisation), BJP, Mr. Ram Lal, at the BJP Headquarters in New Delhi and congratulated him on the triumph of the party. Those present indeed the Public Works (Building and Roads) Minister, Rao Narbir Singh, and Officer on Special Duty to Chief Minister (Media),  Raj Kumar Bhardwaj.