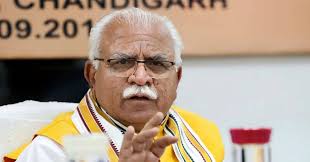 Chandigarh January 27,2021: Haryana Chief Minister, Manohar Lal has strongly condemned the incident in Delhi especially on Red Fort on the occasion of Republic Day and said that the farmer’s protest has now gone out of the control of its leaders and has deviated from its direction. He has also appealed the farmers to return to their homes after yesterday’s sad incident.

The Chief Minister said this after a special meeting of Haryana Cabinet convened late evening yesterday after the incidents occurred on the occasion of Republic Day. He said that the whole cabinet is unanimous that people of the state together fail the nefarious intentions of anti-social elements and cooperate in maintaining peace and harmony in the country and the state.

Mr Manohar Lal said that no Indian can tolerate hoisting of flag other than national flag at the Red Fort. Doing so is an insult to those great freedom fighters and martyrs who sacrificed their lives so tha the tricolor could fly high on the ramparts of the Red Fort.  Our freedom fighters did not earn freedom for us to spread such anarchy, he added.

He said that the farmers’ organizations had given firm assurances for a peaceful protest in Delhi but this incident has proved that the leadership of this protest has gone into the hands of those who have a difference between their words and deeds. Therefore, now the farmers should think deeply about which direction this protest is going, he said adding that in democracy there is enough scope to resolve differences. He said that all kinds of differences can be resolved through mutual dialogue.