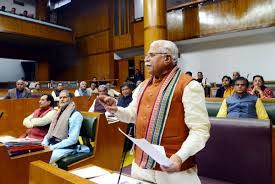 Chandigarh, March 8, 2019:: Haryana Cabinet which met under the Chairmanship of Chief Minister Manohar Lal here today approved the amendment in Industrial Licensing Policy, 2015.
Presently, warehousing is not inherent in the definition of Industries and the same is restricted to 10 percent in an industrial township. But now after the Amendment in the policy, such warehousing units may be considered as part of the industry for the purpose of setting up of the colony. In any industrial colony, either part of a colony or if there is enough demand then the entire colony may be developed in the form of plots for warehousing. The license fee will continue to remain the same. However, the conversion charges as applicable for warehouse, other than agriculture produce, will be levied. The colonizer at the time of submission of an application for grant of the license will be required to submit a proposal with regard to the provision of plots for warehouse along with its justification. The increase in Floor Area Ratio (FAR) of warehouse plots from existing 0.75 to 1.25 will be allowed.

The colonizer will have to complete the infrastructure facilities in the entire industrial colony and allot at least one-third of either, plotted industrial area in case of the industrial plotted colony or the permitted industrial FAR in case of the flatted industrial colony before he is allowed permission to occupy the facility created under the residential and commercial uses. For the development of industrial colony in the de-notified SEZs, the Cabinet decided to grant last and final opportunity of six months to all those who wish to avail the benefit of this policy. However, eligible candidates would be required to apply, whether denotified or are to be denotified, within the said extended period of six months, failing which the window of opportunity would not be extended.

In the industrial colonies in such towns where Deen Dayal Jan Awas Yojana (DDJAY)-2016 is applicable, the option of availing DDJAY policy under the industrial housing will also be made available to industrial workers so as to make them available affordable housing at affordable rates.

Haryana to regularise illegal conversion to residential properties to commercial
CBI ARRESTS AN ABSCONDER THEN APPRAISER IN CUSTOMS DEPARTMENT, CURRENTLY IMPERSONATING AS A DOCTOR IN A MEDICAL COLLEGE
Comment