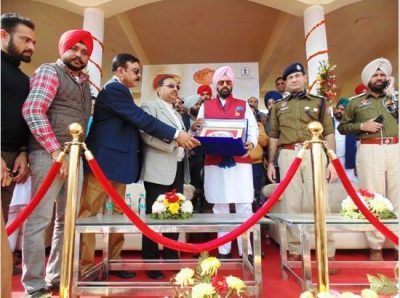 The Minister, accompanied by MLA Raminder Singh Amla, Deputy Speaker Punjab Vidhansabha Ajayab Singh Bhatti, Deputy Commissioner Chander Gaind took salute from the impressive march past of the captains of the participating teams besides having interaction with the captains. The Minister said that it was a matter of immense pride for Guru Har Sahai subdivision to host such a mega event where  around 150 players were representing the Kabaddi extravaganza from six different Countries including host team India, Australia, Canada, New Zealand, Sri Lanka and England. He further added that this event would play an instrumental in triggering the passion for Kabbadi among youth especially in the rural folk. The minister said that Chief Minister Captain Amarinder Singh led Punjab Government is committed to celebrate 550th birth anniversary of Shri Guru Nanak Dev ji in an unsurpassed manner adding that he said that we are fortunate to celebrate 550th birth anniversary of Shri Guru Nanak Dev ji during our life span and he was clearly remember celebrating 500th birth anniversary of Guru ji fifty years ago. The minister exhorted youth to come forward, connect with the sports and avail the benefits under new Sports Policy of Punjab adding he said that as per new policy the gold medallist of Olympics to get prize worth Rs. 2.50 Crore along with a government job.

The Minister said that winning team would be awarded with the the cash prize of Rs. 25 lakh while the runners-up and the team clinching the third position would get Rs. 15 lakh and Rs 10 lakh respectively. He said that the participating teams were-divided into two groups adding that India, England, Srilanka and Australia were in Group A whereas Canada, USA, NewZealand and Kenya were in Group B.

The Minister said that Kabaddi was the mother game of Punjab and the state government was committed for popularising this game further amongst our youth through such tournaments.

Deputy Commissioner Chander Gaind said that Guru Har Sahai has created history by organizing such a gala event with thousands of spectators in the ground and credited Sports Minister Rana Gurmeet Sodhi for this successful organization.