Home » Government has already fulfilled all the demands of the employees working under the National Health Mission, strict action against employees gone on strike, Vij 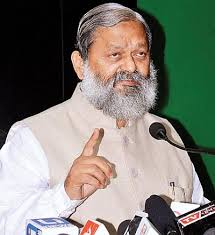 Chandigarh, Feb 18, 2019:  Haryana Health Minister,  Anil Vij said that the government has already fulfilled all the demands of the employees working under the National Health Mission. Therefore, the Government will take strict against the employees who have gone on strike in an unfair manner.

The Health Minister said that during the last four years, the present State Government has fulfilled the demands of NHM union to pay an average salary of Rs 15,000 monthly to 11272 contractual employees. Under this, Service Rules have been framed for these employees, which have come into effect from January 1, 2018. This has caused almost twice the additional burden on the state exchequer,

Vij said that earlier, the expenditure which was Rs 60 crore, has now increased up to Rs 110 crore in 2018-19 and is expected to increase up to Rs 120 crore in 2019-20. In the year 2018-19, about Rs 283 crore has been spent on the salary and allowances of NHM employees. Not only this, these employees are also being given Dearness Allowance and House Rent like regular employees.

The Health Minister said that despite all this, appropriate action will be taken against those employees who are on strike. Under this, services of 2500 employees have so far been ended and in future, if required, then the action is possible against other employees. He said that NHM is the Central Government’s project under which employees working cannot be regularized.

Vij said that even though these employees are aware of this fact yet they are raising unnecessary demand. He said that such employees should not come under anybody’s influence and should resume their duties at the earliest.