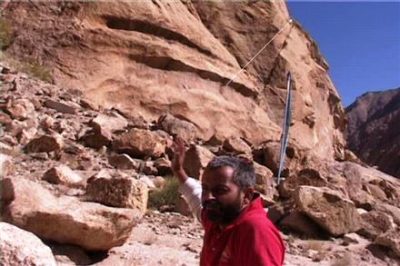 CHANDIGARH: Global warming is a natural process and man’s activities have no role to play in enhancing or reducing the cyclic process sounds incredible but it is true for Dr Ritesh Arya whose research paper “Aryas ‘C’ Cycle and climate Chandigarh natural model based on geological evidence for future climate predictions in the Himalayas” has been accepted for presentation in the 36th International Geological Congress to be held in New Delhi in March next.

Explaining his Aryas ‘C’ cycle research said while he was exploring and developing round water for the Indian Army in Ladakh in 2007 he was surprised to read an news item that man to be responsible for climate change and global warming. And dramatically linked the pollution level rise with global warming and propagated all this ‘inconvenient truth.’

His new concept of bio-geologic cycle may demolish the “myth” that global warming is man-made phenomenon and says it is a “100 per cent natural cyclic process.” He termed the views propounded by the nobel prize-winning Inter-governmental panle on climate change as an “unnecessary myth about global warming.”

He further stated that it was hard to digest the man or his activity is too small for causing any lasting impact on the global warming or cooling phenomenon. Prior to this he was more focused on rocks and how to get water from them and identifying the paleo- channels. Since then he focused more on collecting evidences to understand the cyclicity of global warming and cooling.

uddenly borewalls samples which were coming out from the wells on the banks of Indus river revealed some interesting results and the rocks were nowhere to be found in the vicinity. There were glacial sediments to have been transferred to a long distance by glacial action. This was turning point and he discovered the evidences of Indus glacier which might have extended from Mansarovor to banks of Arabian sea. But today Indus glarier had already vanished and is restricted to the peaks of the Mansarovar or the higher Himalayas.

All these and many more glaciers including the KhardungLa glacier and the Siachen Glacier had also receded but the rate of recession was much higher in the past compared to the present. Today majority of the glaciers in the Himalayas have vanished or on the verge of extinction which was happened much before industrialization and polluting technologies came into existence.

With advancement of his research work, he discovered some interesting geomorphic structures in the Ladakh batholiths carved by various phases of warming and cooling cycles on the river Indus. These structures represent the alphabet “C.” Uniforming in the thickness of ‘C’ structures he concluded that climate change consisting of global warming and cooling is natural cyclic process and man has no impact on the cycling of the climate change.

He asserted that there was no scientific evidence to support that man activities caused climate warming. His findings have been corroborated by Saraswati and Indus glacial retreat (11000BC) and flooding 10000BC construction and submergence of Ram Sethu 5114 BC, Dwarka submerger 3000BC paleolake flooding events in Lamayuru 1012 Ad shrinking of Tso Morin lake all these events were result o glacial melting in Himalayas induced by global warming.

He further said if we consider last Ice Age to be around 11718 years from present based on ice cores from Arctic then each climate cycle is approximately 1338.6 years. “Moreover, evidence suggests that the climate change curve is curvilinear like alphabet ‘C’and not the hockey stick curve proposed by earlier,” says he. He is all set to introduce a new concept of bio-geologic cycle to explain the relevance of global warming in shaping the earth now and in the future.