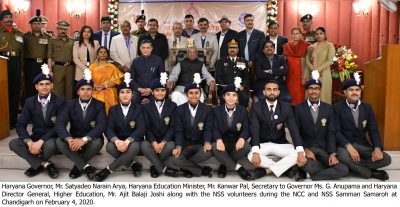 Chandigarh,March4,2020 ( By YS.Rana) : Haryana Governor  Satyadeo Narain Arya has called upon the youth to get training of the National Cadet Corps (NCC) and National Service Scheme (NSS) to inculcate discipline and leadership qualities among themselves during the Samman Samaroh organized to felicitate the NCC and NSS cadets.

As many as thirty-two NCC cadets and nine NSS volunteers, who participated in the Republic Day parade in Delhi on January 26  were honored. Among the participants were 10 girls cadets of the NCC, Haryana. This NCC contingent also secured the first position for the fourth time consecutively in the yearly parade. Similarly, nine volunteers of the NSS were honored, including four girls.

The Governor congratulated Chetan Gupta, an NSS volunteer from Hisar, Haryana, who led the contingent of NSS in the Republic Day Parade. He also gave a cheque of Rs 21,000 each along with a memento to the cadets and volunteers. He announced an additional amount of Rs 5,100 to all cadets and volunteers.

Governor said that the motto of the National Cadet Corps (NCC), is “unity and discipline”, while the motto of the National Service Scheme (NSS) is “not me but you”. These two institutions work on their morals and motivate youth towards social service. Sharing his student-life experiences, Mr. Arya said that he has also been an NCC cadet and had developed an incline towards social service and had led a disciplined life. The cadets and volunteers actively participate and organize various social services and awareness campaigns, including blood donation camp, eye-donation camp, AIDS awareness campaign, dowry eradication campaign and Swachh Bharat campaign.

At the function, Vijay Mehta, Group Commander Brigadier of National Cadet Corps (NCC) said that NCC was the largest youth organization in the world. It is providing training to more than 15 lakh youth working under 17 directorates in the country. He said that a large number of NCC cadets have commissioned as officers in the Indian Army.

Regional Director of NSS, Dr. Kamalkar, said the volunteers have provided efficient leadership in the government and non-government sectors. He congratulated the youth who were honored today. On this occasion, Secretary to the Governor, Dr. G. Anupama and Director of Higher Education Department Ajit Balaji Joshi and other senior officers of NCC and NSS were present