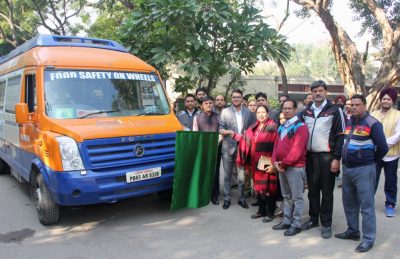 MOVE AIMED AT CHECKING ADULTERATION OF FOOD ITEMS IN DISTRICT

By SK.Vyas:
Jalandhar, December 3,2019: The Sub-Divisional Magistrate (SDM-II) Mr Rahul Sindhu and
Civil Surgeon Dr Gurinder Kaur Chawala on Tuesday flagged off a ‘Food Safety on
Wheels’ mobile van to check the adulteration of the food under the Tandarust Punjab
Mission.
Divulging the details, they said that the mobile van will visit every nook
and corner of the district till December 31 and a team of the food safety wing will
check the quality of the food samples and will give the report on the spot.
They said that the main motive of sample testing by the van was to ensure
that people get a good quality of hygienic food besides checking its adulteration. They
told that this ultra-modern van was capable of detecting adulteration of food on the
spot, which could help the people in checking the quality of food being consumed by
them.
They further said that the sampling of food through this van will be
carried out in Phillaur on December 3, Goraya on December 4, Nurmahal on
December 5, Nakodar on December 6, Shahkot and Malsian on December 9 to 11,
Kartarpur on December 12, Adampur and Bhogpur on December 13, Maqsudan area
on December 16, Rama Mandi on December 17, Model Town on December 18, Chhoti
Baradari on December 19, Model House on December 20 and will cover remaining
areas on December 23 to 31 to ensure that people of the district only consume
healthy food.