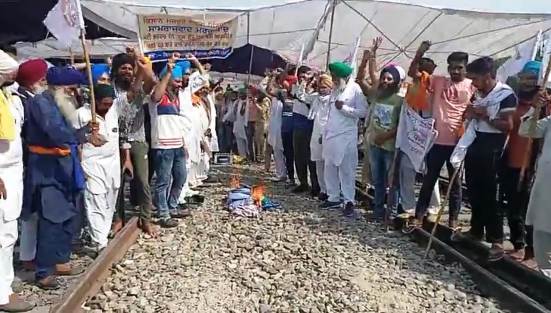 Ferozepur, September 30, 2020: Without any initiative for dialogue with the farmers from the government over the three disastrous farm Bills, on the 7th days, protest continued on the railway tracks in Ferozepur and Amritsar, the protesters today burned SIMs of the Reliance company.

The farmers of small border state has great contribution to the nation’s food bowl but feeling ignored with the introduction of three Farm Bills.

A call for a boycott of Corporate Houses from October 1 has already been given.  Apart from this protest, the farmer leaders also invited any government representative to come forward for debate over three Farm Bills said to be in favour of India’s agriculture sector.

Speaking to media persons, Satnam Singh Pannu, State President, Kissan Mazdoor Sangharsh Committee, Punjab said, our protest would continue till October 2 and in the meantime, a Core Committee of the 31Farmer Outfits have been called to decide further course of action.

We strongly condemn the vague statement of Modi that the protest is for the sake of protest as we still hold good that the Farm Bills have been introduced to benefit the Corporate Houses, said Pannu.

Pannu pointed out that the Corporate houses work for big profits without taking care of the farmers.  Challenging of three Bills in the Supreme Court and filing a case in the High Court against the peaceful protesters is a sign of hand in gloves with the Modi government with the intention to attack the farmers’ agitation.

He said, big houses are not the solution to the problems of farmers rather small industries would benefit.  The Bills otherwise will throw small farmers to big sharks.

The way the Bills have been introduced and passed through undemocratic and anti-federal actions on the part of Central government, without having any interaction at the ground level farmers to keep intact their interests especially the MSP issue which is considered as the lifeline of poor farmers and a key to their survival, he added.

On asking about 10 member Committee constituted by the BJP, Manjinder Bhullar Advocate sitting on protest with the farmers said, we extend an open invitation for a healthy debate on this issue to put an end to the controversial issue.  Adding he said, there are many shortcomings – like no provision for civil court jurisdiction, erection of permanent structure in the fields of farmers when sufficient space is available with the government, contract farming is not in favour of small farmers etc. –  in these Bills that are not in favour of farmers.