Home » Farmer’s march is backed by political parties of Punjab and some organizations :Manohar Lal 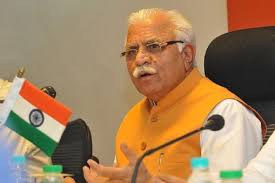 Gurugram, November 28, 2020: Haryana Chief Minister, Manohar Lal said that it is really unfortunate and condemnable to see how some people are furthering their political agendas in the name of farmers.  He also appealed to the farmers of Punjab that their representatives should hold talks with Central Government as this is the only solution.

The Chief Minister said this while interacting with media persons after presiding over the meeting of District Public Relations and Grievances Committee in  Gurugram today. He said that the ongoing farmers’ march is mainly backed by political parties of Punjab and some organizations there.  He said that he has been trying to contact  Punjab Chief Minister, Amarinder Singh regarding the farmers’ march for the last three days, but he did not respond.

“I personally made several calls to Punjab Chief Minister but every time the request was denied. It is really unfortunate to say that this is the first time it has ever happened that one Chief Minister is trying to talk to another Chief Minister, but his counterpart is not ready to talk,” said Manohar Lal.

Only Chief Minister Punjab can answer as to why he refused to talk, said Manohar Lal, while responding to a question asked for the reason behind Mr. Amarinder Singh not taking his calls.

Punjab Government clearly is responsible for the ongoing farmers’ protest as office bearers of the Punjab Chief Minister’s Office are leading the protest, said Manohar Lal, when asked about his opinion if the farmers’ march looks like a political conspiracy of Punjab government.

Manohar Lal said that the farmers of Haryana did not participate in this march, for which he also thanked them. Appreciating Haryana Police for dealing with this march, the Chief Minister said that the police showed restraint and did not use any force. The State Police only tried to stop the farmers from unjustifiably marching towards Delhi in such a large number.

The P.G. Department of Hindi, Lyallpur Khalsa College for Women, Jalandhar celebrated Hindi Diwas on September 14, 2022 in the college campus. Various competitions were organized on the said occasion as poem recitation, poster making, essay writing, etc. Madam Principal Dr. Navjot congratulated everyone on this day and said that our language is our identity and it has been given the status of a mother. Thus we must promote it and it is also our duty to respect it. Dr. Sarabjeet Rai, Head, P.G. Department of Hindi also described the importance of the Hindi language. Not only the students of Hindi department, but students from various streams participated actively in these celebrations. Madam Principal Dr. Navjot applauded the efforts of Dr. Sarabjeet Rai, Head, P.G. Department of Hindi and Dr. Amardeep Deol for organizing this day.

1 kg heroin worth about 5 crores seized, 4 accused including 2 women arrested