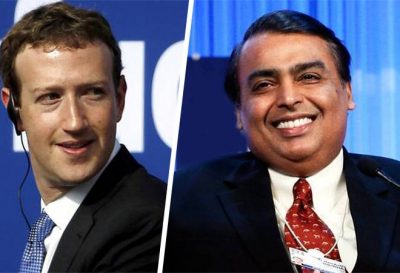 Facebook is one of the biggest social media giants in the World and now it has decided to invest money in the desi Indian Company Reliance Jio which will make it the largest minority shareholder among all. The Facebook Company is ready to invest nearly $5.7 billion on Jio which will obviously boost up not just the Reliance Company but also the Indian Economy because ultimately the money will flow in India only.

This news is officially discussed by Facebook on its media blog and the Reliance has also confirmed the news to the Media.

This news was announced only after UK newspapers started posting news about the Facebook Shareholding in Reliance Jio.

Both Reliance Jio and Facebook have focused on one common term between them and this jio platform which means that both of them are planning something big and it seems that it will the top service in which Facebook would be interested in investing.

Since Facebook is one of the biggest social media platforms and if it wants to penetrate more in India then nothing could be better than a mobile service and it is widely known that within a small time period Jio has made its special place in India mobile market and it greatly impacts the major decisions related to the mobile network services.

Earlier Facebook wanted to launch lots of new services in WhatsApp which is also a popular messaging App being used in India. A few months back there was news that Facebook wants to monetize WhatsApp and to do this it has partnered with Reliance Jio to enable a local business and customer interaction through JioMart.

Facebook has announced that in total it will invest $65.95 billion as pre-money enterprise value which is equal to 4.62 lakh crore Rupees in various platforms of Reliance Jio. The initial investment of $5.7 billion equal to Rs43, 574 crores has already been done.

After investing such a big amount by Facebook in Reliance Jio it would become the owner of 9.99% equity shares which is really a big deal as two are big giants in their own fields.

What could be the reason that Facebook has invested in Reliance Jio?

Reliance Jio is a good brand name in the Indian economy which has a large user database and to penetrate at the root level nothing could be better than buying stakes in Jio by Facebook.

In future Facebook wants to use Jio’s small business platform maximum so, that after integrating it with WhatsApp they can reach the small business owners easily.

Reliance Jio has made a statement in which the company has made it clear that its goal with this investment is to reach small business owners by connecting at a root level and provide new business opportunities and this will include all business sizes across India. The focus would always be on small businesses.

Reliance aims to connect with 30 million micro, small and medium business enterprises with 120 million farmers and 30 million small merchants which is the informal business sector and not just this the Reliance company also wants to empower people to use various digital services.

Facebook Mark Zuckerburg, Facebook CEO has also stated that this business deal is done with the aim of providing new job opportunities in India as the country has 60 million small businesses and millions of people rely on these businesses.

Currently, all people are staying inside their homes because of lockdown, many of these small and medium enterprises are not able to function because of lack of digital support but they can rely on new digital tools to communicate with their customers and do business.

He further stated “This is something we can help with — and that’s why we’re partnering with Jio to help people and businesses in India create new opportunities. I want to thank Mukesh Ambani and the entire Jio team for their partnership. We’re looking forward to getting started.”

Mukesh Ambani, Reliance Industries chairman, and managing director said that this deal between the two giants could help Digital India.

He further said “The synergy between Jio and Facebook will help realize Digital India Mission with its two ambitious goals — Ease of Living and Ease of Doing Business for every single category of Indian people without exception. In the post-Corona era, I am confident of India’s economic recovery and resurgence in the shortest period of time. The partnership will surely make an important contribution to this transformation.”

According to the Reliance Jio Company investment by Facebook is the largest investment for a minority stake has been done by any tech giant in the World and so far the largest FDI in the technology sector of India.

WhatsApp feature which could be used for small and medium enterprises

WhatsApp is one of the most used messaging apps in India which is used not just for sending text messages but other files to like the photo, videos, and other smart features like voice calls, video calls. So, it is an App that has been loved by Indian smartphone users very much.

A few months back the Facebook Company acquired this messaging app and installed many features like Web WhatsApp which makes it usable on PC or Desktop and WhatsApp payments through which one can send or receive money, WhatsApp cryptocurrency.

What will Facebook and Reliance gain from this Investment?

It is pretty clear that after the investment is done Reliance Industries will pay off its dues and for the first time Facebook would get a wide reach at root level in India.

Exclusive • Lifestyle • Thought of the Day

Even though you’re damaged, you still have value