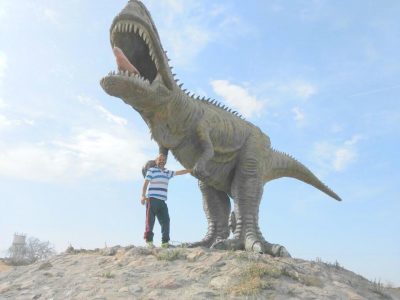 While talking to Dr Ritesh Arya, said that dinosaurs had always fascinated the imagination of all whether one was a scientist or a filmmaker or for that matter a common man who has no knowledge about the fascinating world of fossils which ruled the planet from time to time and now became extinct species.

He further stated that from childhood he was also fascinated by these monsters who ruled our planet for more than 150 million years ago and then became extinct. Ever since he participated in the International Field Workshop which was held from Jabalpur (where first Dinosaur egg was found) to Rayoli from where more than 10000 dinosaur eggs have been reported to date). How these magnificent creatures lived and became extinct was any body’s guess and it was my curiosity.

Many theories have been proposed to explain the extinction of Dinosaurs but all fail to explain the selective extinction of Dinosaurs who ruled the planet for more than 150 million years. Continuation of finding fossils in traps and Inter-trappean of Deccan basalt which lasted for more than 30000 years as per reports published clearly showing that Dinosaurs in India did not die instantly but gradually lovingly ended their lives for love of light fire heat in a similar way as moths are attracted to the light of a candle. His observations are based on the unusual behavior of lizards which were attracted to light sparks and the heat generated by welding of pipes during a drilling operation in Ladakh Batholiths along the Indus Suture Zone at Tiger Mahle for Indo Tibetan Border Police, he states.

The attraction was so high that these lizards did not fear for their lives and moved closer to sparks of welding as the intensity increased. This made the author think that in the past, dinosaurs were not able to differentiate between natural heat/light and were attracted to heat and light of Continental Flood Deccan Basalts (CFDB) that gradually or episodically crept to their nesting sites. Covered with mud these nests were baked and preserved.

The author tries to correlate these annotations to propose a new theory for selective episodic extinction of Dinosaurs in India based on their love and passion for light.fire, sparks, the heat emitted from the slowly creeping basalt besides explaining taphonomic processes involved in the preservation of the largest nesting sites at Rayoli, Balasinor, Gujrat India in those uncertain geological conditions prevalent during those times.

Notably, he has submitted nine papers on various topics that have been accepted by the IGC for presentation.

The International Geological Congress is a nonprofit scientific organization whose meetings are held in collaboration with and under the sponsorship of the International Union of Geological Sciences (IUGS), The IUGS holds its General Assemblies in conjunction with Sessions of the IGC. The main purpose of the congress is to encourage the advancement of fundamental and applied research in geological science worldwide. 1st IGC meeting was held in 1878 in Paris. Since then 35 IGC  meetings are held every 3-5 years. In 1964 22nd IGC was held in New Delhi and after a gap of 25 years 36th IGC will be again held in New Delhi from 2-8th March 2020. More than 8000 geoscientists from all over the world are expected to attend the mega geological event which is also considered to be the Geological Olympiad held almost after every 4 years.

‘Bhed Palak’ initiative changes the life of rural Himachal
IS IT STRATEGIC OR INCIDENTAL DECISION  OF SHIV SENA?
Comment