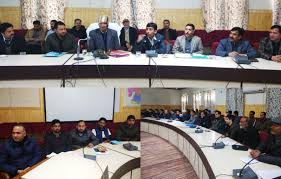 By SK.Vyas
KUPWARA, MARCH, 24,2019 : The Election Expenditure Observer, Arjun Lal Meena   held a meeting on Sunday morning with   Assistant Election Observers (AEOs), Nodal Officers of MCC, MCMC, DCC of Kupwara along with their accounting teams.
During the meeting, the Election Observer sought coordination from the officials with regard to the expenditure part during election and also directed them to monitor unusual or doubtful transactions especially while the Model Code of Conduct (MCC) is enforced. He also requested them to coordinate with their counterparts and facilitate for the smooth conduct of Lok Sabha Election 2019.
The District Election Officer (DEO) Kupwara, Anshul Garg also directed the concerned officials to monitor the functioning of flying squads, static surveillance teams and video surveillance teams in the field and urged officials to discharge their duties effectively to ensure free and fair election in the district.
The assistant expenditure election observers, nodal officers  accounting team members participated in the meeting.