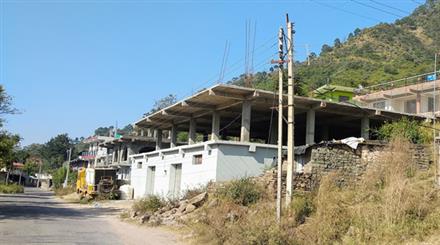 DHANGIARI (SOLAN): Earth Science Centre  is coming up in village Dhangari in district Solan of Himachal Pradesh. The Centre is founded by Dr. Ritesh Arya (Ph.D.) in Geology who himself belongs to Kasauli. While talking to Dr Arya on the sideline of the project told PBD that it was an effort to promote and popularize earth science which was a neglected subject.

Aiming at educating the students about different types of rocks present in Himachal Himalayas and their applications both in academic and in the industry to build self-sufficiency and sustainable infrastructure in the hill states, he added. He further talked about the project and said the Centre would consist of 10 Sections—museum; water; energy; climate change; geoengineering; disaster management and sustainable development.

Museum section will focus on Himalayan evolution based on fossils collected by Dr Arya since 1986. Fossils of Leaves, Wood, Flowers, seed, Insect wing, Mammals gastropods bivalves reptiles representing diverse fossil assemblage which will represent the gradual squeezing of Tethys sea leading to a final collision of India with Tibetan plate culminating with final upliftment and evolution of Himalayas will be on display.  Water section will tell us modelling of groundwater in the Himalayas and its use for sustainable development in solving water problem in different hydro-stratigraphic locations.

Geothermal energy development has been in use since time immemorial for cooking food and space heating by Guru Nanak ji in Manikaran more than 500 years ago.  Use of geothermal energy in Remote corners of the Himalayas for socio-economic development where solar and hydro are economically not sustainable. This will boost the geo-tourism in the remote areas. History of Hydro energy development in the Himalayas will also be displayed in the museum and emphasis laid on the importance of Hydro Power in our day to day life and how the hill state is responsible for powering the homes in most parts of north India.

Disaster management and sustainable development section will comprise the studies of Dr. Arya about the entire mechanism of the cloud burst phenomenon and concluded that Reservoir formed at the time or before the cloud burst due to landslide was responsible for the devastation caused by a cloud burst. Cloud burst as such had no impact on causing landslides or flash floods in the region. Understanding paleo flooding and its causes will be of utmost importance as the center itself is located on one such deposit. Besides, the Centre will have an earthquake, minerals sections

The Centre will also work for identification and preservation of geo heritage sites which are of geological importance, says Dr. Arya and adds that the Centre will have evolution and Astro-biogeology section to promote extra spatial research and elements of evolution of life in space and planet earth.

In a bid to expand the footprints of BJP in the state, the BJP senior leaders has appointed Prof Bikram Rana as district senior vice-president BJP. It is stated by the district President Mr Baldev Sharma in a press release.