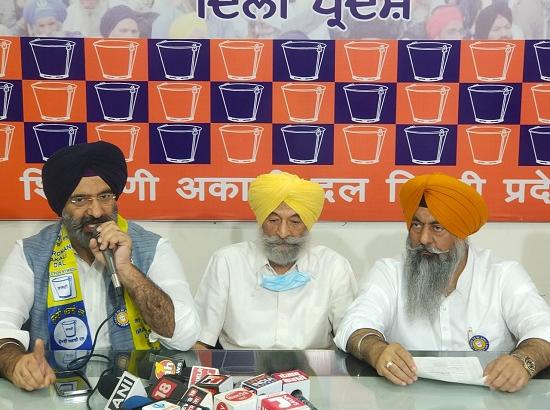 Interacting with the Media persons here today in presence of DSGMC President Manjinder Singh Sirsa and General Secretary and Delhi unit President Harmeet Singh Kalka, party’s Delhi In charge Balwinder Singh Bhunder disclosed that we have finalized these 26 candidates unanimously after due consultations. He said that list of the remaining 20 candidates will be released soon.

Manjinder Singh Sirsa said that all candidates have been directed to interact with the public only on religious issues as this is a religious election. If any opponent resorts to mudslinging on them, they should avoid such things.

They should tell people about works done by them, how we served Sangat even after stiff opposition by the government, everything should be conveyed to Sangat.

He said that in our agenda first, we will brief how we have stopped misuse of DSGMC stage for mudslinging and such persons have been showing the door. He said that secondly, the present team has done a splendid job even during COVID lockdown which has been praised by Sangat worldwide. He said that we have served farmers as per the wish of Sangat of Delhi and ensure bails for those arrested besides providing langar and other facilities to them.

He said that Government tried to snatch our symbol bucket from us by with ardas and blessing of Sangat government failed in its ulterior motives and those who opposed the principle of Miri Piri of Guru Sahib, everyone knows their position. He said that our candidates will work only on positive agenda and will not indulge in any activity which brings a bad name to us.