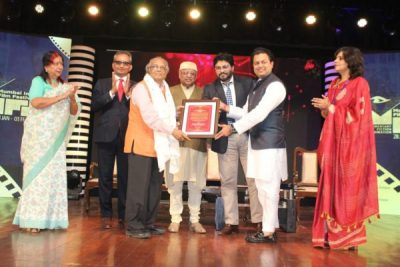 Receiving the award, the lifetime achievement awardee said:” It is very difficult for the voice to come up when you are on cloud nine. It is a great privilege to receive this award from the documentary film making fraternity and from the Films Division. It is a great pleasure also to receive this award from Union Minister Shri Supriyo and the State Minister Shri Deshmukh. I am speaking from my heart. I made a four-hour film on Indian history, after working on it for almost fifteen years, with no financial backing. It traces the history of India from more than 5,000 years ago to 1976, I titled the film as From Indus Valley to Indira Gandhi I could not find anyone to distribute the film, until Warner Brothers came to my rescue, transforming it from complete failure to complete success. I have never accepted to make a single film in which I did not believe. Over time, I have developed a philosophy where one remembers what one plans and wants to achieve. It is a privilege to have V. Shantaram’s son with us to represent the great tradition and bestow me with this honor.”

He further reminisced: When my film From Indus Valley to Indira Gandhi was released in 1976, I was attending the world premiere of my film. At the end of that show, I got a message that the Indian Parliament was discussing my film that day for forty minutes. I sent a message to the then I&B Minister Shri L. K. Advani, expressing my gratitude for the discussion on the film, but also saying that it would have been more beneficial for the parliamentarians to watch some portion of my film. A leader of the stature, Shri Advani organized a show for himself and for some of his colleagues. Later, he told me that I have done a great film.” Shri Krishnaswamy expressed his gratitude to Films Division, the Government of India and to the film industry for the award.

One of India’s senior-most and active filmmakers who made socially relevant documentaries, Dr. S. Krishnaswamy has more than 200 non-fiction films to his credit and a dozen television serials. His 18-episode television serial Indian Imprints on the impact of ancient India over South East Asia, telecast on Doordarshan in 2009, had received an overwhelming response.
His four-hour-long film tracing the 5,000 years of art, culture, history and heritage of India on celluloid was distributed by Warner Brothers in 1976 which received global attention. His documentaries have covered a wide range of subjects including industry, agriculture, electoral reforms and biographies of multifarious personalities.

Recipient of many coveted awards, including the Padma Shri by the Government of India in 2009 and the Lifetime Achievement Award from the US International Film & Video Festival, Los Angeles, Dr. S. Krishnaswamy is also well known for the pioneering book Indian Film which he co-authored with Erik Barnouw in 1963. His recent book An Unlikely Chemistry: Autobiography of a Couple, helps understand modern India.

Dr. S. Krishnaswamy is the son of K. Subramaniam, the legendary filmmaker who played a key role behind the establishment of the Tamil film industry. He completed his graduation in Physics in Madras and got enrolled in a diploma course of the British Institute of Radio Engineers, London. After graduation, he joined Columbia University to pursue a course on films and film making, where he met Professor Erik Barnouw, the co-author of his book ‘Indian Film’.

The prestigious Dr. V Shantaram Lifetime Achievement Award is presented in every edition of MIFF, to a filmmaker for seminal contribution to documentary films and its movement in India. It carries a cash award of 10 lakh rupees, trophy and a citation. Shyam Benegal, Vijaya Mulay and Anand Patwardhan are a few of the veteran film makers who had been bestowed with the award in previous years. The award is instituted in memory of legendary filmmaker V Shantaram, who was closely associated with Films Division as Honorary Chief Producer during the 1950s.