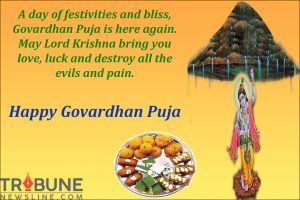 The fourth day of Diwali is celebrated as different ways. While some celebrate it as Govardhan Puja, some as Vishwakarma Day, some as Annakut and some as Balipratipada (Padwa). Different places have different rituals too. Read on to find out:

Balipratipada is a compound word consisting of Bali, a mythical daitya king and pratipada (also called padva) means occasion, commence, first day of a lunar fortnight) It is also called the Akashadipa (lights of the sky).

Mahabali was Prahlada’s grandson. He came to power by defeating the gods and taking over the three worlds. Bali, an Asura king was well known for his bravery, uprightness and dedication to god Vishnu. Bali had amassed vast territories and was invincible. He was benevolent and popular, but his close associates weren’t like him. They were constantly attacking the Devas and plundering the gods who stood for righteousness and justice.

According to Vaishnavism mythology, Indra and the defeated devas approached

Vishnu for help in their battle with Mahabali. Vishnu refused to join the gods in violence against Mahabali, because Mahabali was a good ruler and his own devotee. But, instead of promising to kill Bali, Vishnu promised to use a treacherous means to help the devas.

Mahabali announced that he will perform Yajna and grant anyone any gift they want during the Yajna. Vishnu took the avatar of a dwarf Brahmin called Vamana and approached Mahabali. The king offered anything to the boy – gold, cows, elephants, villages, food, whatever he wished. The boy said that one must not seek more than one needs, and all he needs is the property right over a piece of land that measures “three paces”. Mahabali agreed. The Vamana grew to enormous proportions, metamorphosing into the Trivikrama form, and covered everything Mahabali ruled over in just two paces. For the third pace, Mahabali offered his own head to Vishnu who pushed him as the king of patala.

Pleased with the dedication and integrity of Bali, Vishnu granted him a boon that he could return to earth for one day in a year to be with his people, be worshipped and be a future Indra. It is this day that is celebrated as the Bali Padyami, the annual return of Bali from the netherworld to earth.

The rituals observed on the Bali Padyami day have variations from state to state. In general, on this festival day, Hindus exchange gifts, as it is considered a way to please Bali and the gods. After the ceremonial Oil Bath, people wear new clothes. The main hall of the house or the space before the door or gate is decorated with a Rangoli or Kolam drawn with powder of rice in different colours, thereafter Bali and his wife Vindhyavali are worshipped. Some build Bali icons out of clay or cow dung. In the evening, as night falls, door sills of every house and temple are lighted with lamps arranged in rows. Community sports and feasts are a part of the celebrations.

Some people gamble with a game called pachikalu (dice game), which is linked to a legend. It is believed that god Shiva and his consort Parvati played this game on this festival day when Parvati won. Following this, their son Kartikeya played with Parvati and defeated her. Thereafter, his brother, the elephant-headed god of wisdom Ganesha played with him and won the dice game. But now this gambling game is played only by family members, symbolically, with cards.

The farming community celebrates this festival, particularly in Tamil Nadu and Karnataka, by performing Kedaragauri vratam (worship of goddess KedaraGauri – a form of Parvati), Gopuja (worship of cow), and Gouramma puja (worship of Gauri – another form of Parvati). Before worship of cows, on this day, the goushala (cowshed) is also ceremoniously cleaned. On this day, a triangular shaped image of Bali, made out of cow-dung is placed over a wooden plank designed with colourful Kolam decorations and bedecked with marigold flowers and worshipped.

Govardhan Puja as it is also known, as a Nature workship Hindu festival in which devotees worship Mountains like Govardhan parvat and prepare and offer a large variety of vegetarian food to Bhagwan Shri Krishna as a mark of gratitude. The Annakut festival occurs on the first lunar day of Shukla Paksha (bright fortnight) in the Hindu calendar month of Kartik, which is the next day of Deepawali (Diwali), the Hindu festival of lights, and also the first day of the Vikram Samvat calendar.

Krishna spent most of his childhood in Braj, a place devotees associate with many of Krishna’s divine and heroic exploits with his childhood friends. One of the most significant incidents, described in the Bhagavata Purana, involves Krishna lifting Mount Govardhan (Govardhan Hill), a low hill situated in the middle of Braj. According to the Bhagavata Purana, forest-dwelling cowherds living close to Govardhan used to celebrate the autumn season by paying respect to Indra, the God of rain and storm.

Krishna did not approve of this since he desired that the villagers worship Mount Govardhan with the reason that Mount Govardhan is the one that provides natural resources to the villagers for their livelihood. Trees provided oxygen, the grass provided food for the cattle and provided natural beauty. The mountain was responsible for the natural phenomena that occur in the city of Gokul. Indra got angry with this advice.

Shri Krishna, though being younger than almost everyone in the city, was respected by everyone due to his knowledge and immense power. So, the people of Gokul agreed with Shri Krishna’s advice. Indra was angered upon seeing the villagers’ devotion diverted away from him and toward Krishna. Indra decided to initiate thunderstorms and heavy rains in the city in reflex of his egoistic anger. To protect the people from the storms, Shri Krishna lifted the Govardhan mount on his little finger and provided shelter to all the people and cattle of the city. After 7–8 days of continuous storms, seeing the people of Gokul being unaffected, Indra accepted defeat and stopped the storms.

This day is therefore celebrated as a festival that paid respect to Mount Govardhan by preparing a ‘giriyajna’ – a “great offering of foods and delicacies to the mountain” Krishna then assumed the form of a mountain himself and accepted the villagers’ offerings. Indra, after causing torrential rains for seven days, ultimately gave up and bowed to Krishna’s superiority. This story is one of the most recognizable in the Bhagavata Purana. Govardhan has since become a major pilgrimage site in Braj for devotees of Krishna.

On the day of Annakut, devotees circumambulate the hill and offer food to the mountain—one of the oldest rituals in Braj. The circumambulation consists of an eleven-mile trek dotted along the way with several shrines, before which devotees place flowers and other offerings.

Families create an image of Giriraj Govardhan (the mountain) from cow dung, adorning it with miniature cow figures as well as grass as twigs, representing trees and greenery. In the days leading up to Annakut, fifty-six food items (chappan bhog) are typically prepared and offered in the evening. Someone from a cow-herding caste officiates the ritual, circling the hill with a cow and a bull, followed by families in the village. They partake in the sanctified food after offering the food to the hill. The festival often draws a large crowd, including the Chaube brahmins of Mathura.

Hindus throughout the world actively celebrate Annakut as a part of Diwali and, most frequently, pair the Annakut celebration with the Govardhan Puja performed on fourth day of Diwali celebrations. Hindus also view Annakut as a time to transmit religious and cultural values to children, ask for forgiveness from God and express devotion towards God. Annakut is celebrated with diyas (small oil lamps) and rangoli, decorative art on the ground made from colored rice, colored sand, and/or flower petals.

Many distinct food items, sometimes numbering in the hundreds or thousands, are offered to deities during Annakut. For example, 250 kilograms of food were offered to Lord Krishna at the ISKCON temple in Mysore, India in 2009. Although Annakut is most often associated with Lord Krishna, other deities are also focal points. At the Shree Mahalakshmi Mandir in Mumbai, India, 56 sweets and food items are offered to Mataji and then distributed as Prasad to more than 500 devotees.

The Annakut festival is also celebrated annually at approximately 3,850 BAPS (Bochasanwasi Akshar Purushottam Swaminarayan Sanstha) Mandirs and centers throughout the world in a day-long event. During the festival, Swaminarayan devotees prepare and offer a large variety of vegetarian food to Hindu deities including Swaminarayan and Krishna, among others. The Annakut festival at BAPS mandirs is often the largest festival of the year.

Visitors learn about Hindu spirituality, offer prayers for the new year, partake in the prasad, or sanctified food, and engage in other devotional activities. A devotee at the BAPS Swaminarayan Mandir in Leicester, England, which organizes the Annakut festival every year, describes Annakut as being a forum where spiritual aspirants can reaffirm their appreciation for the role God plays in their lives. These gatherings also represent an opportunity to reaffirm a sense of community.

Vishwakarma Jayanti is a day of celebration for Vishwakarma, a Hindu god, the divine architect. He is considered as swayambhu and creator of the world. He constructed the holy city of Dwarka where Krishna ruled, the Maya Sabha of the Pandavas, and was the creator of many fabulous weapons for the gods. He is also called the divine carpenter, is mentioned in the Rig Veda, and is credited with Sthapatya Veda, the science of mechanics and architecture.

It falls on ‘Kanya Sankranti’ of Hindu Calendar. It is generally celebrated every year on gregorean date of 16 or 19 September which is on the last day of the Indian Bhado month, in Solar calendar. Solar Calendar observed by states such as Assam, Uttar Pradesh, Karnataka, West Bengal, Bihar, Jharkhand, Odisha, and Tripura. The festival is also celebrated in its neighbouring country Nepal.

The festival is observed primarily in factories and industrial areas, often on the shop floor. As a mark of reverence, the day of worship is marked not only by the engineering and architectural community but by artisans, craftsmen, mechanics, smiths, welders, industrial workers, factory workers and others. They pray for a better future, safe working conditions and, above all, success in their respective fields. Workers also pray for the smooth functioning of various machines.

Vishwakarma puja is also celebrated a day after Diwali, along with Govardhan Puja in October–November.