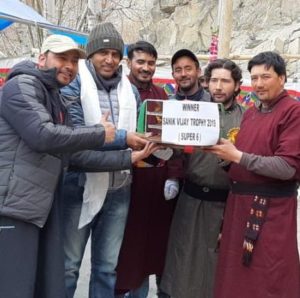 Our Correspondent
KARGIL, MARCH 24,2019: Deputy Commissioner Kargil, Baseer ul Haq Choudhary today said that District Administration Kargil is committed to rejuvenate and give impetus to traditional as well modern sports in the district and all possible efforts will be made to accomplish this goal.
The DC stated this while addressing archery players and sporting enthusiasts during the final matches of Sainik Vijay Trophy Archery Championship organized by Sainik Social Welfare Association Shilikchey Kargil Ladakh at Archery Ground Beathang Shilikchey here today.
Commanding Officer 4 Rajput Col Akash Karwal, District Youth Services and Sports Officer Kargil , District Cultural Officer Kargil besides other concerned officers were also present on the occasion.
While appreciating the efforts of the organizers for having organized the annual archery championship this year as well, the DC expressed optimism that the tournament will go a long way in giving boost to social and communal harmony besides imbibing values of positive competition and team spirit among players.
In the finals of Super 15 and Super 6 matches played between TG 15 and Apati Arachers, TG 15 emerged victorious in both formats.
The DC while stressing on players to maintain a healthy balance between traditional and modern archery while pursuing their sporting passion urged the need to held events in both formats so as the importance of the former does not get fade away.
While underlining the importance of creating awareness among the general masses about the importance of traditional sports like archery and to ensure their rejuvenation, the DC said that skilled archers will be made brand ambassadors under Khelo India.
The DC said that youngsters have enormous passion and exhibit  immense talent for games like archery and keeping this in view the Administration will plan to provide them necessary guidance and training under the supervision of eminent coaches so that they can compete in national and national events. This issue would be taken up with the State and Central Government as well as other concerned agencies, he asserted.
Later, the DC and other officers distributed medals and prizes among the participating players.